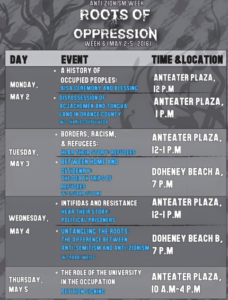 image via screenshot from http://garyfouse.blogspot.com/2016/05/uc-irvine-bash-israel-week-is-here.html

The pro-Palestinian group Students for Justice in Palestine decided that they should mock Zionism (and Israel) by scheduling their anti-Zionism week with Holocaust Remembrance Day. Not classy, guys:

Justice in Palestine (SJP) partnered with the Muslim Student Union (MSU) to host a week-long celebration of “anti-Zionism,” which coincided with Holocaust Remembrance Day.

The main feature of the event was a mock apartheid wall erected in the center of campus with a picture of convicted hijacker Leila Khaled, who is popularly credited as the first female to hijack an airplane.