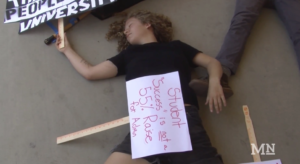 Looks like they’re bored of going to class, huh?

Students across the California State University (CSU) system are threatening to starve themselves until their school forks over $8 million for diversity funding, and some are even staging “die-ins” along the way.

On Monday, ten students played dead in front of the president’s office at the California Polytechnic State University (Cal Poly) for nearly an hour to protest a recent increase in administrative salaries.