A professor actually lost out on an academic job due to his anti-Israeli musings. Beware, the following tweet is NSFW (or “not safe for work”) due to profanity. 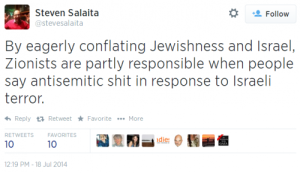 “This month, my campus, the University of Illinois at Urbana-Champaign, was widely expected to welcome Steven Salaita as a new faculty member,” Cary Nelson wrote in an essay which appeared on Inside Higher Ed.com on August 8, 2014.  “He was to be a tenured professor in the American Indian studies program. But a decision not to present the appointment to the Board of Trustees was made by the chancellor. Although I was not involved in the process and did not communicate my views to the administration, I want to say why I believe the decision not to offer him a job was the right one.”

“Salaita has written credibly on fiction by Arab Americans and is, so I am told, knowledgeable about Native American studies. But Salaita’s national profile — and the basis of his aspirations to being a public intellectual — is entirely based on his polemical interventions in debates over the Arab/Israeli conflict. Those interventions include his 2011 book Israel’s Dead Soul, which I read last year, and his widely quoted and prolific tweeting. Israel’s Dead Soul is published by Temple University Press, so it is part of his academic profile.”

Nelson served as president of the American Association of University Professors (AAUP) from 2006 to 2012. For its part the AAUP has distanced itself from Nelson on this issue. Cary Nelson supports the university’s decision.

“Recently we argued in a policy statement on ‘Academic Freedom and Electronic Communications,’ that faculty comments made on social media, including Twitter, are largely extramural statements of personal views that should be protected by academic freedom,” Rudy Fichtenbaum, AAUP president, and Hank Reichman, first vice-president and chair of the AAUP’s Committee A on Academic Freedom and Tenure stated on August 7, 2014. “While Professor Salaita’s scholarship does appear to deal with the topic of Palestine, his posts were arguably not intended as scholarly statements but as expressions of personal viewpoint. Whether one finds these views attractive or repulsive is irrelevant to the right of a faculty member to express them. Moreover, the AAUP has long objected to using criteria of civility and collegiality in faculty evaluation because we view this as a threat to academic freedom. It stands to reason that this objection should extend as well to decisions about hiring, especially about hiring to a tenured position.”

By the way, Nelson still serves on Committee A. For the record, some of Salaita’s tweets, as reported by The Chronicle of Higher Education on August 15, 2014, include:

Fichtenbaum and Reichman’s argument that Salaita’s tweets are made apart from his classroom lectures has some merit. Nevertheless, there are some indications on the professor’s overwhelmingly favorable rate my professors.com ratings, from when he taught at the University of Wisconsin-Whitewater, that his sentiments spilleth over at the podium in class:

Actually, Accuracy in Academia has never come out for firing professors based on their political beliefs. We merely chronicle the cases in which those views spill over into the lecture hall disguised as facts. Nevertheless, it is ironic that a left-wing professor in a field dominated by that viewpoint should experience what the handful of conservatives in academe have felt for years. Moreover, it is interesting to see the lengths they have to go to to achieve that distinction.