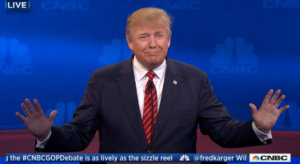 image via screenshot from GOP debate

A Students for Trump event at Portland State University was greeted with hostility Saturday when campus police officers tried to kick Trump’s supporters to the curb while protesters reacted hysterically to chants of “USA! USA!”

Students for Trump began the event by erecting a wall on campus but campus security attempted to force the students to leave on the grounds that the wall was a “structure” rather than a “sign,” and thus violated university policies. However, the students were ultimately allowed to remain on campus but were harshly ridiculed by their peers, who called them “pathetic,” “idiot,” and members of the “party of ignorance.”