Development programs run by the World Bank and other multilateral agencies regularly fail because they rely on government aid rather than the free market, New York University economist William Easterly said recently at the Cato Institute. 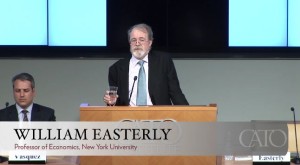 For example, Easterly recounted, in a World Bank-backed forestry program in Uganda, farmers were forcibly removed from their farms and relocated to cities. He said, “The result of this, this is the tyranny of experts at its most extreme.”

Similarly, experts cannot shake their belief that somewhere there is a “benevolent autocrat” they can assist.  Easterly noted that in Ethiopia under former dictator Meles Zenawi, when the country showed economic growth, the credit went to Zenawi. However, other economists found that the growth actually resulted from “a recovery from a recent drought.”

In order to laud Zenawi, all of the above avoided mentioning his government “shooting demonstrators in the streets” after a rigged vote or a 2010 “forest resettlement scheme, ” similar to the rather embarrassing one in Uganda.

Additionally, Zenawi sentenced a “peaceful blogger” to an 18-year prison term. Upon his death, “the Ethiopian government celebrated” the arrival of U.S. Secretary of State John Kerry by imprisoning at least a half-dozen more bloggers.

But World Bankers never seem to learn from such embarrassments. The current World Bank President, Dr. Jim Yong Kim, told an audience in October of 2012 that the World Bank must “become the ‘solutions bank,’ and the bank should offer what he would call, ‘evidence-based, non ideological solutions.’” Easterly said that Kim meant that “you’re not allowed to debate freedom versus autocracy.” In the same speech, Kim “called for a new science of delivery,” which Easterly averred “is so technocratic this is an embarrassment to the technocrats.”

Ironically, Kim could look at his own birthplace of South Korea in order to see how markets triumph over dictatorships.  Easterly pointed out that “growth miracles in Asia” are due to “a decline in autocracy and a growth in freedom.” For instance, Easterly noted that communist North Korea still appears to be pitch black during the night sky while its neighbor, the democratic South Korea, is lit up by growth, infrastructure and economic progress.

The development community, Easterly said, “split freedom up in small slices; no one seems to have the big picture that they all go together.” He went on to say, “The World Bank also selectively chooses” these slices of freedom and still, “We praise without reservation and give credit to an authoritarian government.” Even with some progress in recent years, Easterly said that these organizations are “not making enough headway to change the prevalent mindset in development.”