As far-left neo-Marxism finds its way into American schools under the guise of Critical Race Theory, parents are standing up to reject the movement and remove politicians who propagate it. 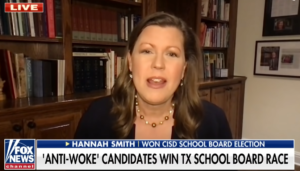 Hannah Smith, a new school board member in Southlake, Texas, during an interview with Fox News.

In a suburb outside of Dallas, parents turned out to the polls in resounding numbers to defeat proponents of anti-racism education in a divisive local election in May. According to NBC News, conservative candidates won seats on the Carroll ISD School Board by an average of 30-70%, marking a massive victory for those who hope to preserve traditional American values. Leading up to the election, national news outlets published stories characterizing Southlake as a place with a “dirty secret” where racism “was swept under the rug.” However, board members of the Carroll Independent School District claim this widespread attention mobilized members of their county toward the right. According to Hannah Smith [pictured above], who was recently elected to the Carroll School Board, residents of the district could not “stand for [this] false narrative anymore,” and turned out to the polls in droves. Normally, municipal elections in Texas receive around 3,000 votes. In the Southlake School Board elections however, over 10,000 ballots were  cast in the vast majority of races, indicating the public developed strong feelings about the issue and intended to make their voices heard.

In Wake County, North Carolina, public pushback against anti-racist instruction in education forced Wake County Public School System (WCPSS) to remove an “Intro to Critical Race Theory” course from its list of professional development courses. Journalists from the North State Journal uncovered the contents of the training through a records request and revealed them to the public in a recent article. The exposé piece prompted protests from parents at school board meetings in Onslow County and others in North Carolina. Following these events, the WCPSS decided to remove the training from its site to avoid a potential hit to their political agenda.

The resounding victories for Texas and North Carolina families illustrate that parents can correct failures in their children’s education if they get involved. However, following numerous rejections of anti-racism education, Democrats realized that “woke” education is a losing battle and are now attempting to change their narrative. Even though Critical Race Theory centers around the idea that America is “systematically racist,” progressives suggest they only wish to broaden children’s horizons by including a wider range of historical events in history classes. In support of the Left’s political agenda, the media attributes right-wing pushback to Critical Race Theory as a response to the “insidious” false narrative created by conservative politicians. Time magazine even called CRT the “latest boogeyman” of the Republican Party, suggesting that the focus around CRT stems from a desire to get reelected.

The recent attempt to deflect criticism away from the party disregards central tenets of Critical Race Theory. The intellectual framework incorporates five main concepts: (1) race is a societal construct (2) racism is normal, not aberrational, and present in all systems in the United States to oppress minority groups (3) race is materially deterministic, meaning change in the system only occurs if it benefits the advantaged groups that hold power (4) minorities are racialized in different ways depending on the interest of whites (5) the voices of people of color are uniquely and superiorly equipped to speak on political issues involving race. Clearly, Critical Race Theorists believe our nation is racist to its core, and every system in our country was created with the intent of holding disadvantaged groups back. As a result, they argue the system should be torn down and rebuilt in an equity-focused manner. However, their conception of equity originates from Karl Marx; thus, their solution to America’s issues is communism.

America became the greatest country in the world because of the equal opportunity it provides its citizens. The inalienable freedoms of our constitution are allotted to all Americans regardless of race. These freedoms empower every individual to chase the American Dream which drives the unprecedented success of our nation. Parents have realized the threat Critical Race Theory poses to the next generation, and their action is producing significant results. As Democrats utilize CRT as a tool to spread divisive propaganda for political gain, conservatives across the country must continue to fight to protect America’s legacy for the future.