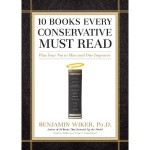 Plus Four not to miss

Students, particularly conservatives, can get a good idea of how much they missed in their education by reading  10 Books Every Conservative Must Read: Plus Four Not to Miss and One Imposter by Benjamin Wiker.

The names that you might expect to see in such a compendium are here, including Hayek, Chesterton and even C. S. Lewis. What may surprise some are the additions, specifically Shakespeare, Jane Austen and Aristotle.

Benjamin Wiker, with each book, gives a backdrop for each author’s  life and how modern Wiker then meticulously analyzes each book, comparing them to situations that a modern conservative reader could understand.

In The Road to Serfdom Friedrich August von Hayek argues that a primary problem of socialist government is it intends to write details for each individual and each “concrete circumstance,” taking away liberty from the individual citizens. Wiker and Hayek found that “socialist government sees itself as a benevolent god; it becomes instead a malevolent tyrant.” Both Wiker and Hayek believe that “people are best served when they are given the opportunity to serve themselves and their local communities” and not by appointed bureaucratic officials. Wiker warns, “If someone takes that responsibility from us, he has stripped us of our moral nature.”

The Abolition of Man by C.S. Lewis continued to build on Aristotle’s fundamental belief of the importance of family in society and man’s true nature. He believed, like Aristotle, that “the inherent drive of liberalism to remove all limits to the human will inevitably brings it to transform, stage by stage, a good form of government into its evil opposite, a republic into a mild democracy, a mild democracy into extreme democracy, and extreme democracy into tyranny.”

William Shakespeare’s play, The Tempest shows a “wise and benevolent God.” A key lesson learned from it is that “bad things happening in the world are not caused by the failure of a deity, or the lack of a deity.”

Sense and Sensibility by Jane Austen illustrates two opposites: “good sense” vs. “strong feelings unguided by wisdom,” or conservative values against liberal values. Austen saw the value of moral restraint and conduct over the passionate unrestrained love of Romantic thinking.

Aristotle, according to Wiker, believed that the family is the fundamental foundation of society, and not what liberals call a social agreement. He also believed that moral order arose from the natural beginning of man, not from some arbitrary rules designed by man, society, or government.

Ironically, one title Wilker does not recommend is, in turn, one that many conservatives treasure.  Of Ayn Rand’s Atlas Shrugged, Wiker argues that so-called “rationalism” leads only leads to narcissism and selfishness is not the cure for collectivism or moral relativism.

4. C.S. Lewis The Abolition of Man

5. Edmund Burke’s Reflections on the Revolution in France

Spencer Irvine is an intern at the American Journalism Center, a training program run by Accuracy in Media and Accuracy in Academia.