America’s ongoing and seemingly-constant crises have left Americans scrambling to find a sense of normalcy and safety. Just in time, to cut through the chaotic bombardment of conflicting messages and opinions while providing a voice of calm assurance and reason, is noted conservative scholar Victor Davis Hanson in his latest book, “The Dying Citizen: How Progressive Elites, Tribalism, and Globalization are Destroying the Idea of America”. 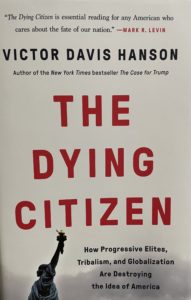 Hanson’s background is in the classics, such as Greek philosophy and history, and he weaved consistent themes and lessons from Greek history to apply to America’s current crises.

The book is a must-read for the engaged, or unengaged, American citizen because it interprets and explains the present day in a calm manner, free of clickbait or inflammatory rhetoric.

In a prescient warning, he reminded the reader that the collapse of the middle class could prove to be America’s undoing and encouraged Americans to no longer remain silent in the face of elitist power grabs from the federal and state government.

He pointed to illegal immigration and claimed that the practice of open borders has devalued, if not negated, the unique value of American citizenship. American citizens have become mere residents of a country that they call home, even though citizenship should be defined by more than one’s residency.

Citizenship in Athens, as Hanson asserted, was unique because it was an identity and it was earned. Athens’s middle class became a collective body keenly interested in the welfare of the city-state. But its decline came, much like the Roman Empire, when it no longer made citizenship a unique achievement and lifestyle. Hanson warned that open borders and lackluster enforcement of U.S. laws will make American citizenship obsolete and a memory of the past like Athens and the Romans before them.

Hanson’s stinging criticism of California’s political, social, and economic morass was something to behold, too, because he did not pull punches and cited data to highlight how California has fallen far from its idealistic and once-proud status among the U.S. states. When it was once viewed as a model for the country, California is now the butt of jokes or source of derision throughout the U.S.

One of the more memorable parts of the book was Hanson’s complete takedown of the federal government bureaucracy which peddled the “Russiagate” hoax for years, in addition to Democratic Party power brokers, politicians such as Barack Obama and Hillary Clinton, and a complicit mainstream media. He did not mince words and he traced the corrupt connections between the federal government, mainstream media, and Democratic Party to perpetuate lies to malign and undermine President Donald Trump.

Whether the reader is a history or classics buff, or not, it does not matter because Hanson is clear, understandable, and direct. He does not get caught up in the academic mumbo-jumbo or word salads typically found among the Ivory Tower elitists.

The way in which Hanson weaves examples and lessons from classical or ancient history to the modern day practically gift wraps the proper context to the reader. It is one thing for an author to present material and rattle off dates and events, but what defines a superb author like Hanson is to present material in an understandable way for the average reader.

Again, Hanson’s book is a must-read for the average American reader and U.S. citizen, especially those worried or stressed about the crises of the present day. His message is calm and clear: America is imperfect, yet it is a far better place than its critics or detractors give credit for.

The book was published by Basic Books, which graciously provided a review copy for Accuracy in Academia.