Marriage quality, gay rights and “love is love” are common refrains that the Left uses in order to dismantle traditional marriage as we know it. Heritage Foundation marriage scholar Ryan T. Anderson’s latest book, Truth Overruled: The Future of Marriage and Religious Freedom, serves as an answer to many of these arguments. 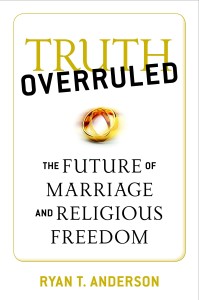 Anderson quoted Supreme Court Chief Justice John Roberts’ oral arguments to make one of his major points, namely that “You’re [gay activists] not seeking to join the institution, you’re seeking to change what the institution is.” Anderson pointed out four harmful consequences of radically changing the definition of marriage:

“Judicial tyranny” was also addressed by Anderson in his book, and States’ Rights to define traditional marriage were tossed aside by five unelected court justices. In turn, the legal foundation for reversing marriage definitions is on shaky legal ground, since additional legal challenges surrounding bigamy and polygamy laws will inevitably be filed. Instead of respecting state law and upholding the Constitution and limited government, the Obergefell v. Hodges ruling actually increased the government presence in the bedroom by fundamentally changing the definition of marriage, Anderson argued. Anderson turned to Roberts’ dissent, where Roberts pointed out how previous marriage-related cases (such as striking down interracial marriage bans)  did not try “to change the core definition of a marriage as the union of a man and a woman,” which was what the majority used as legal precedent and basis in their ruling.

With each argument and rebuttal, Anderson substantiated his arguments with social science studies that uphold the value of a traditional marriage and therefore, a traditional nuclear family. He also took time to outline over a half dozen instances in which religious liberty and freedom were overruled by the gay movement, ranging from the firing of Mozilla CEO Brendan Eich, the outrage over Indiana’s Religious Freedom Restoration Act (RFRA) and how the government has fined small businesses such as Sweet Cakes by Melissa, to name a few. Anderson correctly noted how there is less tolerance and more government coercion in the public space regarding marriage beliefs, due to the lack of religious liberty protections.

Anderson delved into the victims of the redefinition of marriage movement, the implications of denying religious freedom for religious charities, adoption agencies and other charitable efforts, and ended on a high note. He encouraged the formation of a grassroots movement, similar to the pro-life response to Roe v. Wade, to work toward the goal of maintaining religious freedom and the traditional definition of marriage.

All in all, this is a great and insightful book for those who are curious about what supporters of traditional marriage believe in, addressed in a precise and direct manner which is easily digestible for the modern reader.