Michelle Malkin’s book, Who Built That, tells the story of America’s unsung and unheralded entrepreneurs who made America what it is today: a land of the American Dream, free market and freedom. She told the story of many of America’s innovative entrepreneurs such as Nikola Tesla, a genius with electric currents and their application, John Roebling, a fabled bridge engineer who envisioned the Brooklyn Bridge, and Maglite flashlight business owner Anthony Maglica, a Croatian immigrant.

The most compelling story was that of Maglica, whose family survived the brutal Nazi and Italian Fascist governments on a tiny Croatian island in World War Two. He emigrated to the States and built on past achievements with the flashlight, making it a top-notch and affordable product for the American consumer. He, according to Malkin, has won every lawsuit he’s filed to protect his copyright, his company and his reputation. Maglica is proud, as she wrote, to have a main plant in southern California in the city of Ontario. But, he is not a fan of overregulation that is taking over America, such as the incandescent light bulb law that forced him to scrap his own experiments to make it more efficient for the consumer.

The book is a counterargument to President Barack Obama’s statement, “You didn’t build that,” and it makes a compelling case that the American entrepreneurship is a key part of America’s identity. The government did not innovate and create modern marvels such as the Brooklyn Bridge (Roebling), the Tesla coil (Tesla), and the Maglite (Maglica), Malkin believes.

“Who Built That” is worth your time to read in order to gain more insight into America’s history of “tinkerpreneurs,” which Malkin used to describe the innovative, always-tinkering entrepreneurs which have dotted America’s past, present and hopefully, the future. 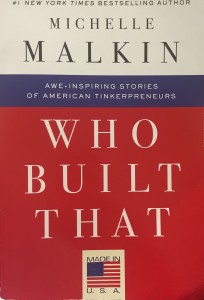