“What do you call Democrats with kids?” goes a joke of fairly recent vintage. “Republicans,” is the punch line. 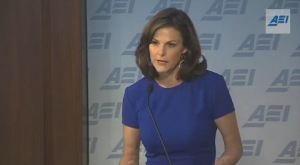 Former CNN reporter Campbell Brown may not have reached that point yet but she has become skeptical of some time-worn shibboleths of public school teachers’s  unions. “I talked to one prinicipal who has been trying to get rid of an incompetent teacher for seven years,” Brown said in remarks at the American Enterprise Institute (AEI) on October 2, 2014.

In her experiences with the New York City public schools, Brown discovered that three key obstacles to reform can be found in union rules on tenure, discipline and seniority.  She blasted “teacher dismissal laws in New York state which are totally dysfunctional.”

“Teachers committing inappropriate sexual acts with children stay on the job,” she noted.

“From 1997 to 2007, 61% of the New York City teachers who were convicted through due process hearings of incompetent teaching, excessive absence, verbal abuse, and/or corporal punishment were returned to the classroom. During that decade, a total of just 61 teachers—averaging 6 of New York City’s 78,000 teachers per year, or 0.008% of the city’s annual teaching force—were dismissed for poor performance,” Katherine B. Stevens noted in a report for AEI.

Brown is assisting 8 families, who are suing to change New York’s tenure laws with the aid of high-powered lawyers working pro bono. This prompted unions to inaugurate a twitter campaign asking “Who funds Campbell Brown?” Indeed, the International Union of Operating Engineers had a sign with that question displayed on their headquarters which are across the street diagonally from AEI.

“I wonder if Cecile Richards of Planned Parenthood ever gets that question,” Brown said at AEI.