“Sanctuary cities” that refuse to turn over deportable felons to the feds are frequently located in college towns. Yet and still, it’s hard to find academics who will speak ill of them, no matter how much these policies endanger collegians’ lives.

Kate Steinle, 32, was not the only recent victim of an attack by an illegal alien with multiple felony convictions. “Department of Homeland Security records show that in just one eight-month period in 2014, more than 8,100 deportable aliens were released by sanctuary jurisdictions,” Hans von Spakovsky writes on The Daily Signal. “Three thousand of them were felons and 62 percent had a prior criminal record.”

“Nineteen hundred were later rearrested a total of 4,300 times on 7,500 different offenses.” The Daily Signal is maintained by the Heritage Foundation, where von Spakovsky is a senior legal fellow.

He has worked as an attorney in the administration of George W. Bush. “The second GAO report (GAO-05-646R), released on May 9, 2005, looked at the crimes committed by 55,322 aliens who ‘had entered the country illegally and were still illegally in the country at the time of their incarceration in federal or state prison or local jail during fiscal year 2003.’

“The path of destruction weaved by these 55,322 illegal aliens was truly shocking. According to GAO, these criminal aliens: 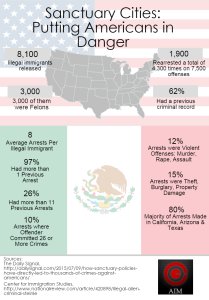