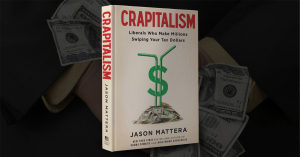 At the new headquarters for the Young America’s Foundation in northern Virginia, Mattera said his book is “not a condemnation of capitalism.” Instead, he suggested that “capitalism is the greatest economic system ever known to man” and has “created paths out of poverty.” But, he believed today “we do not have a free market system” because “crapitalism…has created two classes of citizens.”

Complete with great one-liners and zingers, Mattera includes jaw-dropping numbers of how much money has changed hands from the likes of Congressman Greg Meeks to his campaign supporters and donors (and vice versa). It is a good and simplified look at how liberals are using the government and politicians to fund their own failed projects which would not survive in the free market system.

Perhaps some of them are merely seeking nest eggs. As Jimmy Fallon recently noted, “Politicians are really getting desperate. In fact, Senate Majority Leader Harry Reid sent out a final fundraising email to Democrats with the subject line, ‘I’m begging.’ Because what better way to show you’re a strong leader than acting like you’re drunk and dialing your ex?”