Florida’s state education agency stirred up criticism when it announced this month that it rejected dozens of math textbooks over concerns of politicization and ideological indoctrination.

The Department of Education rejected a total of 54 textbooks, or 41% of overall submissions from publishers, due to content that they deemed “problematic” and full of “dangerous or divisive concepts,” as Accuracy in Academia previously reported.

The New York Post noted that the state agency published four examples of why these textbooks were rejected on its website.

One example was a lesson plan that was supposed to teach about the addition and subtraction of polynomials, but also featured the title, “What? Me? Racist?”

The problem stated, “More than 2 million people have tested their racial prejudice using an online version of the Implicit Association Test. Most groups’ average scores fall between ‘slight’ and ‘moderate bias, but the differences among groups by age and political identification, are intriguing.”

The same problem then provides a formula and informs students to use the exercises to determine bias. 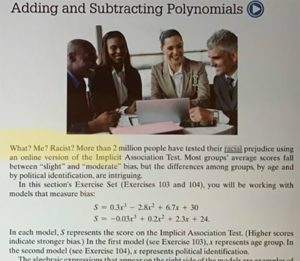 There were also two examples from textbooks that specifically referenced Social Emotional Learning (SEL), which is another left-wing educational concept. One of the examples cited one of the prominent SEL promoters, called CASEL, and outlined the purpose of SEL.

The other example of SEL in textbooks outlined the “SEL Objective” of having students “build proficiency with social awareness as they practice with empathizing with classmates.”

The last example is from an exercise that allegedly measured levels of racial prejudice, with charts demonstrating the different levels of prejudice. 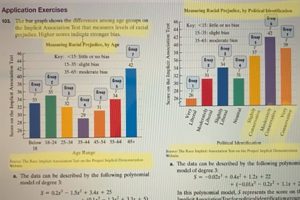 The Florida Department of Education’s message, in part, stated that these examples “do not represent an exhaustive list of input received by the Department.” Its message continued, “The Department is continuing to give publishers the opportunity to remediate all deficiencies identified during the review to ensure the broadest selection of high quality instructional materials are available to the school districts and Florida’s students.”

The rejected textbooks mostly covered kindergarten to fifth grade, according to the state agency.

Although these examples may seem harmless and the rejection of textbooks overblown, it demonstrates how the Left has infiltrated the education publishing industry. The Left normalizes their ideology and portray it as factual and scientific, when it unfairly introduces divisive concepts into the minds of children without parental permission or input.