By way of contrast, Flynn notes that: 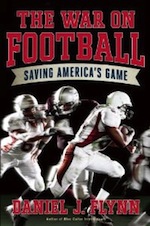 Flynn, the author of four other books, is the former executive director of Accuracy in Academia. In his exhaustively researched, but fast moving, book, he has devoured just about every history of the game and study on injuries in it.

Most of his findings may surprise. For example, the government found that, contrary to an oft-repeated stat, football players actually live to a riper old age than most Americans. Additionally, certain cheerleaders, namely “flyers,” actually experience greater rates of injuries than gridiron athletes. For those not accustomed to this nomenclature, the flyers are the cheerleaders who go on top when the squad creates a human triangle on the field.

“The activity of the flyer is many, many times more dangerous than a football play,” Robert Cantu, co-director of Boston University’s Center for the Study of Traumatic Encephalopathy, found.  “The incidence of concussion in flyers in cheerleading is more than tenfold what it is in football players.”

“The same is true of the incidence of Catastrophic injuries.”

Moreover, as Flynn eloquently points out, the benefits of football far outweigh the drawbacks.  “Players get knocked down and they either stand up or stay on the dirt,” Flynn writes. “Teams lose.”

“Then they chose—regroup to fight another day or fold. Perseverance makes the impossible possible. Players succeed by transcending pain rather than brooding in it.”

The season I played on the team in high school—sophomore year—I had one pulled muscle. That’s when one of the coaches taught me a trick I’ve used ever since. Don’t respond to pain by doubling over but by straightening up. It works. Could that be a metaphor for life itself?

Arguably, at a time when women are posting photos of actors like John Wayne alongside those of performers like Leonardo DiCaprio under the caption “Men: What the hell happened?,” football  is becoming more of a necessity than a luxury.

Flynn also notes that, at a time of an obesity epidemic, the conditioning that football requires is more of a blessing than a curse.  This book really takes me back.

We had a hill that was somewhere between a 45 and 90 degree angle behind the school. I once had to run up it 20 times. Coach John DeFrank caught me smoking a cigar during the season. How did he decide on that number? He asked me how many cigars I smoked that week and like an idiot I told him.

When I checked my memory of this with Coach DeFrank, he stated, “I originally was going to make you run 40 hills, but your honesty and the fact that you were riding a bike at the time (and thus conditioning while you were deconditioning) caused me to reconsider. Pity stayed my hand.”

Malcolm A. Kline is the Executive Director of Accuracy in Academia.
If you would like to comment on this article, e-mail mal.kline@academia.org.