Fox News host Martha MacCallum interviewed American Federation of Teachers president Randi Weingarten about the validity of critical race theory and why it should be taught in America’s classrooms. 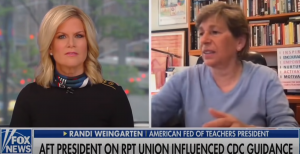 Weingarten, a self-described history teacher, issued the following statement to support  critical race theory: “From everything I can see and understand from the data that I see, 1619 was the year that the first slave boat came from Africa to the United States. So that’s a point in history that I think we should be teaching.”

MacCallum fired back and called it a “very simplistic take” on critical race theory. She said Weingarten’s claim was “not factual” and “not true.” The Fox News host explained, “In fact, scholars say there’s no evidence that colonists were motivated by that in coming to the United States. So, it would be wrong as an historian to want to teach them something that is not true, because that is the basis that sets up all of these other tenets that lead to teaching kids that we live in a systemically racist country.”

What was Weingarten’s response?

Lacking a substantive response, she immediately pivoted to blasting Fox News for “misinformation” about the 2020 presidential election. MacCallum objected and told Weingarten, “This is not the topic we are going to talk about…that is a dodge.” Weingarten later brought up election disinformation a second time in the interview instead of addressing MacCallum’s questions about critical race theory.

MacCallum also asked Weingarten whether she believed in teaching children “that if they’re White they belong to an oppressor class and if they’re Black they belong to a victim class?” Weingarten responded that she is committed to “celebrating diversity and actually looking at people’s lived experience.”

The host did not relent and stated, “If you raise children in this country believing that it’s a bad country that was founded on wanting to preserve slavery, which is simply not true, then we’ve got a problem in our school system.” Weingarten’s reply was that she loves the United States and that she wants to teach about all aspects of American history, especially the subject of civil rights laws.

Critical race theory is the theory that the United States has always been a racist country and that it was built on a racist past. One of its chief promotion vehicles, The New York Times’ “1619 Project,” famously claimed that America’s true founding was in 1619 when the first slave ship came to the United States from Africa and asserted that America’s founding was racist in origin. Instead of teaching students that the founding of the country was in 1776, critical race theory begins with the slave trade. School curriculums based on the “1619 Project” have spread across the country, which has led states like Oklahoma to ban critical race theory in classrooms.

Not surprisingly, the liberal media have praised Weingarten’s performance and gleefully criticized MacCallum’s line of questions. The Daily Beast’s sensational headline read, “Fox Guest Turns Tables on Host, Presses Her About Election ‘Misinformation’” while Huffington Post wrote, “Fox News Host Has Uncomfortable Moment As Guest Presses on Election Misinformation.” Both articles praised Weingarten for turning the table on MacCallum, without acknowledging that Weingarten was trying to distract the audience from the discussion about critical race theory by pandering to union backers and the Left.

When pressed on specifics, Weingarten resorted to platitudes and vague general statements, but the interview exposed how the Left and teachers’ unions want to indoctrinate America’s children through critical race theory-inspired curriculum.