Frequently, left-wing ideologues manage to harm the very people they claim they are aiding. “When your government and your school are constantly telling you that you’re a victim of a racist society who needs protection, you may start believing it at some point,” Mike Gonzalez writes in the recently released book, A Race for the Future: How Conservatives Can Break the Liberal Monopoly on Hispanic-Americans. 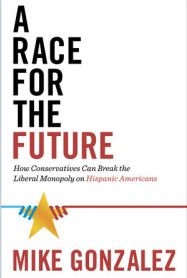 Gonzalez shows, in part, how government schools are failing Hispanics. “In May 2010, the American Psychological Association (APA) published a handful of studies conducted on Latino students, and they had their share of good news and bad news,” Gonzalez writes. “The good news was that overall, Hispanic immigrant parents care a great deal about their children’s academic future and provide the tough love necessary for success.”

“The bad news was that the longer their children were in the U. S. public school system, the more they slipped away from their parents’ grasp and got involved with bad peers and the worse they performed academically.”

Unfortunately, as Gonzalez shows, in some schools, doing well academically will not even guarantee you a good education. “If you’re a Hispanic in California, then, you will go through 12 years of primary education hearing about repression against you as a Mexican; if you go to college, the message will only be amplified,” Gonzalez observes. “That’s sixteen years of indoctrination.”

“Then, when you get out, if you’re an entrepreneur, there’s a huge array of benefits.”  Regrettably, as Gonzalez demonstrates, in California, even charter schools, usually a viable alternative for Hispanics seeking an education, may also be suspect.

“A miniscule example from a charter school backed by the National Council of La Raza would be amusing it if weren’t so troubling,” Gonzalez avers. “Academia Semillas del Pueblo (Sees of the People Academy) is ‘dedicated to providing urban children of immigrant families an excellent education founded upon native and maternal languages, global values and cultural realities.’”

“The school tries to replicate pre-Columbian practices and ‘the Aztec numeric system,’ which is based on 20, as well as follow the ‘indigenous Mexican political form,’ the calpulli.”

Ultimately, the Left, which has created education programs such as the aforementioned, has little moral authority on matters educational, or much else. Conservatives can fill this void. In the cogently argued and well-documented book, Race for the Future, Gonzalez persuasively argues that their need to do so is imperative.

“Poll after poll confirms that illegal immigration rarely makes it into the top five issues that most concern Hispanics,” Gonzalez writes. “It is education, the economy, and the family—the issues we have taken up here—that trouble them most.”

“A frank discussion with Hispanics is thus required on whether they are content with their minority status, their dependency on ‘entitlements based on their status as  “victims” in the wise words of Linda Chavez, the consequent breakup of the family, the educational achievement gap, and the threat of a Latino underclass.”

Such an approach, Gonzalez convincingly posits, is far from the impossible dream many conservatives seem to think it is. “Allowing liberals free access to the hearts and minds of such a great number of people makes no sense, especially when one considers that many of the Hispanics who do not vote (and Hispanics have the lowest voting participation of all the groups recognized by the U. S. Census) tell pollsters that they are largely conservative.”

“Nobody has courted their vote!”