Supposed sages in academe and beyond have been trying to create a schism between Libertarianism and conservatism that need not exist. 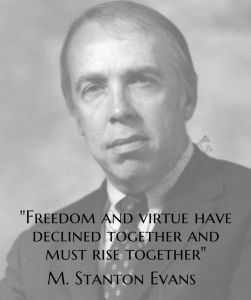 “Freedom and virtue have declined together and must rise together,” author M. Stanton Evans wrote in 1964. At the time Evans was the editor of the Indianapolis News.

“So far are ‘value’ and ‘conformity’ from being identical that the second can rise to its current distasteful height only when the first declines,” Evans averred in an essay which appeared in the 1964 anthology, What is Conservatism? “A man without the interior armor of value has no defense against the pressures of his society.”

“It is precisely the loss of value which has turned the ‘inner-directed’ citizen of nineteenth-century America into the ‘other-directed’ automaton of today.” What makes that distinction particularly ironic it is the manner in which it previewed what was to come in the 1960s: So called “non-conformists” usually occupied about the same slice of the political spectrum, which generally favored big government.

“Men without values are more than willing to trade their freedom for material benefits,” Evans noted in 1964. “That the loss of moral constraint invites the rule of power is surely one of the best-established facts of twentieth-century history.” Evans would go on to write several books, including The Theme Is Freedom: the Religious Roots of American Liberty.