We are truly in an age where who you know is more important than what you know. “The feminist scholars are academically weak but politically well-connected,” Christina Hoff Sommers, who maintains the Factual Feminist blog, said on June 4, 2015 at a “summit” meeting arranged by the Independent Women’s Forum (IWF).  “A bunch fled to the ‘safe rooms.’” 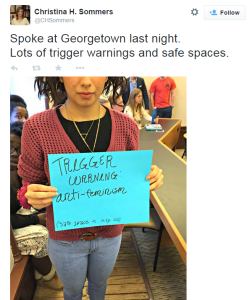 Sommers has seen their power up close and personal. “When I was at Oberlin, the first two rows were filled with women with red duct tape over their mouths,” Sommers, a fellow at the American Enterprise Institute (AEI) said at the IWF meeting. The IWF symposium was sponsored by PricewaterhouseCoopers.

Sommers experienced similar treatment when she appeared at Georgetown, where her appearance was accompanied by “trigger warnings.” As well, applause is now considered a “trigger” and audience members are now encouraged to react to a speech by “waving their jazz hands.”

“In the old days, before this year, people would come to debate me,” Sommers said. She puts the trend down to a virtually universal reaction to a “dear colleague” letter that U. S. Department of Education appointee sent to university officials urging them to double down on fighting rape on campus.

Not mentioned in the missive, Sommers notes, are the possibility that rape suspects are innocent or any reference to civil liberties.