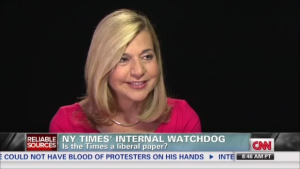 New York Times public editor Margaret Sullivan gave her students at the Columbia Graduate School of Journalism some advice last week based on what she’s learned in the last three decades, since she entered the field:

Overall, Sullivan gives some solid advice, particularly in using social media. But a couple of things caught my eye in her journalism advice to the students.

Sullivan tells the students to fact-check with a vengeance, but never mentions the word accuracy. Maybe she thinks it’s a given, but way too often the media today fail to strive for accuracy, though they obviously should.

Sullivan also puts fairness over objectivity rather than telling the students they should try to be both fair and objective.

And we wonder what’s wrong with journalism today?