Home Faculty Lounge On Exam, “Income Redistribution” is Listed as a Government Function 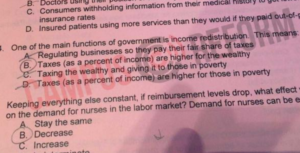 The role of government is to redistribute wealth, according to a course at the Milwaukee School of Engineering.

A test, administered on April 29 in Professor John Traxler’s Healthcare Economics class, told students that “[o]ne of the main functions of government is income redistribution,” then asked them to explain what the statement meant. The correct answer was C: “Taxing the wealthy and giving it to those in poverty.”