Think politics does not play a part in hiring decisions at universities? Think again. Teresa Wagner, a conservative lawyer, has been in the center of a years-long legal battle with the University of Iowa’s Law School over their decision not to hire her because of her conservative political views. Legal Insurrection, a legal blog, explains her case here. She recently spoke at the conservative family think tank Family Research Council, where she once worked before moving to Iowa. 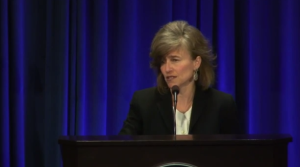 Because she was a conservative, other professors mentioned that “one of the main concerns was that [she] would insert politics into the classroom,” Wagner noted. She could not help but notice “there was a certain amount of irony” about their concern over politics, when their academic writings can “also be characterized as their political interests.” For example, here are some of the topics of the writings of Iowa law school professors:

After being rejected for the full-time position, Iowa suggested she apply for an adjunct position. But, as Wagner stated, “Adjuncts are exploited: they’re overworked and underpaid.” She pointed out how every federal judge has overturned every Iowa state judge’s decision, as the Iowa law school case is being defended by the state’s attorney general.

Yet and still, Wagner said, “Political discrimination is just the tip of the iceberg of wrongdoing in law schools in this country” and it is a disservice to aspiring lawyers. Wagner continued, “We now have egregious financial self-dealing” practices such as the “unjust enrichment of law professors and unjust impoverishment of law students” in today’s law school culture.

Additionally, Wagner pointed out, “Law students are going hundreds of thousands of dollars into debt into a market where they simply are not need[ed] and cannot find jobs. They remain unemployed and underemployed and it is truly scandalous.” She added, “The law schools misrepresent what they do. They do not prepare their graduates for legal practice…it is beneath them.”

Today, “law schools are failing abjectly” and continue to publish “misleading employment placement reports” because even though there are “faculty members at law schools that have no practical experience.” She compared the law school experience to medical training and pointed out how ludicrous it would be if medical interns were not trained by doctors, “[since it would be] like you’re learning to be a doctor through textbooks.”

According to the American Bar Association, law school enrollments are starting to plummet, since jobs aren’t readily available and potential students are questioning whether it’s worth taking a gamble on significant debt. Specifically, 127 – or two-thirds of law schools ) of law schools saw a decline in first-year enrollments in 2014, and 25 law schools saw their incoming class number shrink  less than 100 students. Forbes adds to this and cited a study adds up this information by citing a study which found that in 2013, the percentage of employed law school graduates was 84.5%, and 51% were in law firm jobs (which is the lowest figure in the past 25 years). Even a taskforce created to study how to solve the law school enrollment and employment problems suggested a shift to practice-ready law programs, after which University of Maryland law professor Robert Condlin said that would be “a fantasy” until the labor market rebounds.