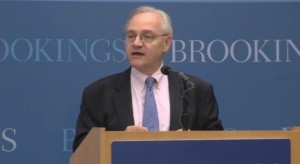 “The Romney coalition is actually made up, a religious make-up that is even more white and Christian of Americans over 65 years old” while the “Obama coalition [has] more religiously unaffiliated [voters] …[a] higher proportion of non-white Christians…much closer to the younger cohort.” He claimed, “The Obama coalition is much more diverse.”

He then addressed the topic of Pope Francis, whose teachings on the poor are a “new optic” for Catholics. Dionne said, “What Pope Francis has done is not change church doctrine. He has restored a concern for social justice for the least among us, the preferential option for the poor, back to center stage.” He believed that previous teachings of Pope Benedict “on economics were quite progressive” because “he was meeting with someone well to President Obama’s Left” during Obama’s trip to the Vatican during his papal service. Dionne felt that Pope Benedict “was a kind of progressive Christian Democrat in his views,” which Pope Francis has echoed during his papal service.

This focus on the poor is “a unifying force within the religious community,” and even after his earlier report on comparing religious conservatives and progressives, Dionne said, “It is a mistake of looking at the religious community in terms of red and blue.” With the young people’s concern for the poor, “those concerns are starting to bleed over into domestic concerns” in politics and religion. Dionne did not hesitate to point out, “It is for Christians, it is quite clear that Jesus cared quite a lot about the poor and talked quite a lot about the poor.” Based on his research, Dionne felt, “economic justice” may be “the fertile ground” for this year’s electoral cycle. He also believed that the “environmental movement…is an important piece” of the religious progressive movement.

He claimed that a community organizing group Gamaliel is funded by the Roman Catholic Church. “Gamaliel,” said Dionne, “employed someone important in our lives named Barack Obama, with funding by the Roman Catholic Church.” Community organizing is another important aspect of religious progressivism, and Dionne said, “There is work to do in this area, and I’m not talking about academic work…but actual political work.” He went on to say, “I always do think that Wall Street has had a role in the Democratic Party.” Another interesting point was when Dionne observed that there was “a rise of a more conservative” religious movement that “paralleled” rising secularism in the American society.

Dorrien, the Reinhold Niebuhr Professor of Social Ethics at Union Theological Seminary, spoke on community organizing and said it “is tremendously important. 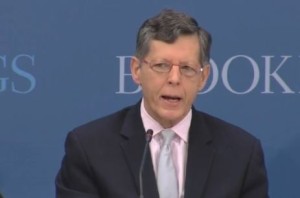 Going on the topic of economic justice, Dorrien warned the audience:

“I want to say emphatically that I don’t believe that there is any kind of economic justice organizing to go on in the next any number of years that doesn’t somehow get its arms around the environmental crisis…everyone gets that crisis…we just need to show it and these two things will rise together. And the same is true…of racial justice and dealing with people’s racial and sexual identities.”

Dorian Warren, an associate professor of political science and public affairs at Columbia University, felt that this discussion “comes at the right time, at a moment of high levels of inequality…the fact that we live in an oligarchy, and both a decline of unions and religious institutions.” Dionne’s report, said Warren, “comes at the right political moment.”

He claimed, “Besides churches, the labor movement is the other independent movement that is serving poor and working class Americans” even with “a decrease in religious progressive institutions.” Warren said, “Unions and churches are self-financed” and that “makes a huge difference on the type of politics we might imagine and see out of those institutions.” He continued, “Both unions and churches are schools of democracy. That’s where people learn the skills of politics and learn how to engage in politics.”

He referred to Saul Alinsky and said, “Saul Alinsky, who is considered the founder of community organizing, the model was based on a mix of the Catholic Church and the union and a community organization and that was how IEF was born in the stockyards of Chicago.” This movement, started by Alinsky, led to “the rise of the worker-centered movement” of “low wage workers…outside of unions.” Warren pointed out that there are “Over 300 and these organizations of low wage workers…back pay…wage theft, which is a growing epidemic of employers not paying what they’ve earned…tied closely to churches and have a faith-based” foundation.

He next dove into the topic of the black American church. Warren saw the “contradictions of the black church” with conservative and progressive sides of their institution, where they are “theologically much more conservative than other Americans, but politically, much more progressive.” One of his observations was, “It’s very interesting to me how both racial and economic justice for black churchgoers always trumps social issues.”

Warren noted, “We can dive deeper into this…about the Holy Trinity. I think for especially black Protestants, race and class have been so intertwined in American history that black voters almost always vote their economic and racial justice interest over social issues, unlike white Americans, which is an interesting finding to me.” He said, “blacks overwhelmingly in favor of government intervention, believe that inequality is a problem” and suggested, “There is this nagging issue within the black church about sexuality and sexual identity.” Continuing on this topic, Warren said, “There is still a lot of work to be done within black churches on the issue of sexual identity.”