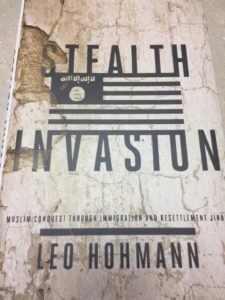 Hohmann reminded the reader that:

He pointed out that refugees and asylum seekers are two different definitions, but have been corrupted over time. Since 1980, the State Department reported that over one million Muslims have been “legally transplanted” into at least three hundred American cities and towns due to Refugee Act of 1920. The United Nations “hand-selects about 95 percent of all international refugees coming to the United States,” said Hohmann. He pointed out that ethnic Christian minorities, such as the Iraqi Yazidis, are often left behind by U.N.’s policies.

But, 1980 is not the only problem with America’s immigration laws. Hohmann pointed out that in 1965, the Immigration and Naturalization Act of 1965 “changed the basic premise of American immigration law from a per-country quota system to one based on family reunification,” pushed by the late U.S. Senator Edward “Ted” Kennedy.

How much does this cost? The Obama administration said refugee resettlement costs at least $1.2 billion each year, but The Heritage Foundation’s Robert Rector said that ten thousand Syrian refugees would cost $5.6 billion over the course of the refugees’ lifetimes. Hohmann found that then-Senator Jeff Sessions said refugee program funding could surpass $55 billion in 2016.

Hohmann then shows the background of Muslim immigrants to the U.S., their support of sharia law and issues with integrating into American society, along with the potential home-grown terrorism threat. Residents in small towns across the U.S., such as Idaho Falls, Idaho and Owatonna, Minnesota, have seen refugees move into their towns and resulting cultural clashes, which Hohmann pointed out is similar to what is going on in Europe when Muslim migrants and culture clash with Western ideals.

He also criticized the Obama administration’s forceful refugee resettlement program, in addition to warning readers about the U.S. becoming another “Lebanon,” where religious schisms created a country without unity and a working government.