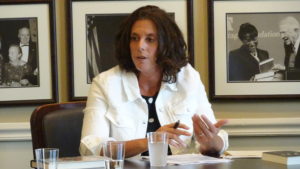 In an interview with author Cheryl Chumley after an Author’s Night Event hosted by Accuracy in Academia she discussed the direction of America and what concerned citizens can do to change the future. In her first two books, Police State USA and The Devil in DC, Chumley explores where the government went wrong. In her interview with us, she discussed the abuse of The Patriot Act and surveillance, abandoning the Christian beliefs the country was founded on and how we, as citizens of the United States, can uphold our elected officials to a higher standard and uphold the constitution and beliefs our country was founded on.

One of the first topics that came up was government surveillance. The idea of spying on citizens in the name of counter-terrorism began after the September 11, 2011 attacks and was codified in the Patriot Act. “The Patriot Act is basically a beast…few people read it and what it did was create the Department of Homeland Security and also gave the government some powers to do surveillance that they previously had to go through a lengthy warrant process,” Chumley said. She continued, saying “our Constitutional rights, our privacy, our first amendment rights, all of them are being infringed and intruded upon a daily basis.”

When asked about the progressive socialism that she warns against in her book she said that “If you’re a socialist, what you basically believe is that those who produce have a moral obligation to share what they reap with everybody else … my issue with that is that I happen to believe that our talents come from God, and in this nation, we recognize that our rights come from God, not government. What that means is that everyone has an equal opportunity to develop their own talents. To create, to produce and to reap their own rewards without relying on other people to do it for them.” In order to prevent this, Chumley recommended that all citizens should be more involved in bringing God back into government and with it, Judeo-Christian beliefs.

When questioned about the attacks on conservatives and Christians in the government, Chumley explained that there is a whole chapter in her book regarding this topic titled Be Brave. In order to prevent the downward fall, she recommends that, “if you believe our nation is turning a corner and going towards a dangerous, progressive and atheistic path, that if you see that, it’s incumbent upon you to be the voice of warning on that. You can’t just sit idly by and let someone else do the fight for you. You have to go out with your voice and you have to fight for these things.”

One of the best ways to use your voice, as she explained, was to vote, a right that “is something that was fought for, hard in this country.” She reminds those who choose not to vote that, “there is never going to be the perfect candidate that will come in and save us. Christians believe in Jesus as their savior. So, until Jesus comes, we are left picking the best human for the job.” At the end of the interview, she quipped that “If you don’t like what’s out there, run for office yourself!”