Home Perspectives The Division between Evangelical leaders and Donald Trump 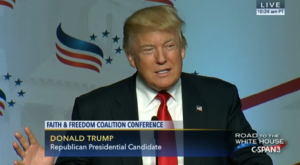 In a meeting with Donald Trump last fall, megachurch pastor Paula White prayed for the candidate saying that “any tongue that rises against him will be condemned according to the word of God.” Although Donald Trump has messed up scripture and admitted to never asking for forgiveness, some Christian leaders continue to stand behind him while others remain questioning his beliefs.

“I think if you look at the things that we, as conservative evangelicals believe in – life, marriage, religious freedom, support for Israel, and terrorism – I think Donald Trump stands for the positions that advance the good,” said executive director of the Christian Coalition Ralph Reed.

At a Trump Rally in Orlando, Florida, Paula White told stories about her friend Mr. Trump saying that he is a “true Christian man.” The Pastor had the crowd chant his name and happily professed that she “found out that he loved God.” She described Trump as “a compassionate man” who will protect the first amendment.

Pastor Mark Burns, a former Barack Obama and Bill Clinton supporter, travels on the campaign trail with Donald Trump. The North Carolinian black pastor has publicly prayed for the GOP candidate and has appeared on various TV stations to discuss his support for Trump.

Last November on MSNBC Burns said, “I’m not an Uncle Tom. This is me looking at the politics, and looking at an individual, a strong leader that I believe that’s going to bridge and bring strength back to America.”

Not all Christian leaders have jumped on the “Trump Train” however. Two Christian organizations, United in Purpose and My Faith Votes, met with Donald Trump last month in New York City. When asked if any of the leaders on the panel would currently be willing to endorse Donald Trump, no one raised his or her hand.

Samuel Rodriguez, the head of one of the world’s largest Latino evangelical organizations, said he wants to speak with the GOP candidate about an alternate immigration plan rather than Trump’s “outrageous” plan that “doesn’t even speak to a pro-life, pro-family, pro-faith ethos.”

Over fifteen million people read Pastor Max Lucado’s blog post titled “Decency for President,” in which the pastor states that Trump would fail the “decency interview” he requires for his daughters’ dates.

“Can we not expect a tone that would set a good example for our children?” said Pastor Lucado.  “I’d hope that if he’s going to call himself a Christian that his language and his demeanor towards other people would more accurately, more consistently link up with the Christian faith.”

Although division remains among evangelicals, Trump continues to praise himself as a candidate who will be the “greatest representative of the Christians” who will not let Christianity get “chipped away.”