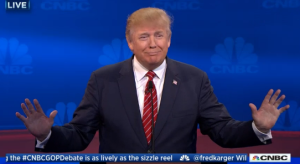 If Trump were to actually win the Republican nomination and become president, it’s questionable whether his policies would be in any sense Republican. Indeed, his foreign policy would be even more pro-Russian than that of Obama and Hillary.

In this regard, the media are slowly but surely telling the truth about The Donald’s love affair with Russia’s Vladimir Putin and exploring his business ties to the Kremlin. Consider some recent headlines:

It is also apparent that Trump’s business dealings with Communist China would continue, despite Ivanka’s scarves violating the federal flammability standard.

Harvard professor Robert Lawrence analyzed the entire Ivanka Trump fashion line of shoes, dresses, purses and scarves, and concluded that 628 of the 838 Ivanka products are said to be imported and 354 made specifically in China.

Donald Trump’s own clothing line of suits and ties are also made in China.

However, on his official website for the campaign, Trump says his “Make America Great Again” baseball cap is “proudly made” in the USA. It sells for $30.

This blog is excerpted from a column which appeared on the Accuracy in Media website. Cliff Kincaid is the Director of the AIM Center for Investigative Journalism, and can be contacted at cliff.kincaid@aim.org