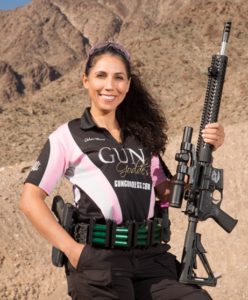 Athena Means might not have started shooting until later in her life, but it did not take long for her to fall in love with shooting. The challenge that shooting offered hooked her and she quickly became involved in the shooting culture. She started her company, Gun Goddess, five years ago when she realized that women were a growing demographic that the gun industry was ignoring: “I was searching for products for my own use that were shooting accessory products but I really wanted them a little more feminine and fun.” Means recognized that if women had gear that they loved and wanted to show off, they would be more likely to go out to the range and practice using it and her weapons.

In the past five years, women have become the fastest growing demographic in the gun industry which has resulted in a “significant change in the products that are available for women and I think manufacturers are far more responsive than ever before to creating products for women and fitting women’s needs.” With the rise of women-friendly manufacturers, this includes women-owned and run companies that bring a new perspective into the industry.

Means explained that while many people may dislike “women gear” what they don’t realize is that “it isn’t just adding color or fun, it’s taking something functional and making it a little bit more personal. We bring something pretty into something functional.” Gun Goddess offers a wide variety of products from holsters and straps to t-shirts and bullet casing jewelry. The gun accessory products all offer the option to be customized, whether with color, artwork or engravings. None of these cosmetic changes affect the product’s functionality. 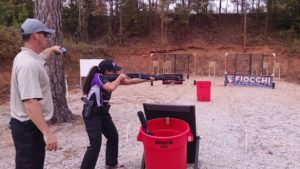 As a female gun owner, Means has had the opportunity to speak to a wide variety of people regarding her occupation and beliefs about gun rights. When starting conversations, Means is careful to only pass on accurate information believing that “misinformation and lack of education is one of the biggest issues we face right now and correcting the misinformation is a huge responsibility we have as gun owners.” Along with correcting the inaccurate information the media and anti-gun movements spread, Means promotes the demographic. “Women’s voices are being heard all the more … and it’s happening even if the media plays it down. It’s important to have a voice and have an organization that will present the information about women gun owners accurately.” Means continued, explaining that accurate information is key to combating the anti-gun movement. “The more people learn and understand, the less likely they are to be swayed against guns by misinformation.”

The rise in gun ownership in women doesn’t fit the media narrative, but Means said “those who preach feminism, women’s rights and women’s independence the loudest, are also the ones who would weaken women by making them reliant on others for their own personal safety.” While most in the media hold the idea that women should be unarmed because they are weaker than men, Means had a quick retort, “I find that offensive because it assumes that women gun owners are untrained and unskilled. Ultimately, I would rather be armed and have a fighting chance of prevailing against an adversary, than disarmed with no chance at all.” And with Gun Goddess, you can be sure she will look great while doing it.