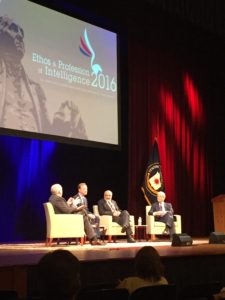 Warner reiterated similar points to Stanekzai’s on the relationship with the United States, “Australia and the United States…have always been a partnership vitally important to Australia and its national security.” Regarding the Islamic State, Warner predicted that “the caliphate will collapse in on itself” after the fall of Mosul and Raqqa, which he thought is likely to happen sooner rather than later. Yet, he warned, “That is likely to replaced by a Sunni insurgency unless we are very agile and very clever.” He added, “The ideology of ISIL has spread too far, too widely for us to be able to destroy it anytime soon.” Referring to terrorism attacks in the West, such as Brussels and Paris, he pointed out that “the willingness is there, the ideology is there” to commit terrorist attacks.

When asked by a NPR reporter whether the Snowden revelations and leaks damaged Australia’s relationship with America, Warner said that the damages from the Snowden leaks speak for themselves and he would leave it at that, which was met with applause by the audience.

For his part, Younger claimed that when the British share information with non-democratic regimes’ security services that may have human rights violations, Younger said, “We are not conferring political or national approval.”

Stanekzai, who walked with a cane due to the injuries sustained in a suicide bombing attack in 2011, pointed out the nature of terrorist threats, “We are not facing a threat confined within a country” because “it is a transnational [threat].” He continued, “We have to mitigate that threat at the same, to prevent it…we need that partnership” in today’s world. Stanekzai emphasized intelligence-sharing among allies, “We need to share information…and to act together in order to stop the threat and where it originates.”