Poor minorities are suffering from a stagnant job market, and it is exacerbated by bad government housing policy planning and safety net for ex-cons, said Kathryn Edin, the Bloomberg Professor of Sociology at Johns Hopkins University. 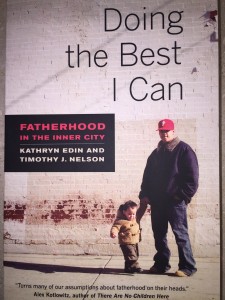 The long-held stereotype of the fathers being those that “run away, selfishly fleeing, leaving the mother with the diaper bag” is actually false, Edin said, at the Center for American Progress. In her research, she said that across the board, accounting for racial and ethnic backgrounds, that narrative was not true. She admitted, “We almost did not believe” the results from the study’s findings. Although Edin did not specify how she measured a father’s involvement in a child’s life, by those measures, fathers in urban areas are involved between 80-85% of the time. And, for fathers in their 20s and 30s, they are the “most intensively involved” in their children’s lives.

Edin pointed out the problem of “serial selective fathering,” or the trend of fathers selecting which child to focus on and parent, but said, overall these men are “fathering all the time.” Yet, because they are unmarried fathers and may not live with the mother, “Of course there are barriers for these dads that you don’t see with other dads.”

Because of their unmarried status, most men “feel and have no legal rights” to their children by default in state and city laws. She saw that most of the low-wage jobs “are anything but family friendly” to mothers and fathers. Additionally, good jobs are in “short supply,” said Edin, and “the lack of work opportunity” frustrates them.

For example, many companies ask for “100% commitment with nothing in return” for low-wage jobs like at Wal-Mart and Target. She called it a “no give, no commitment to the worker” mentality. Yet, Edin asked the audience, “Why would the employer want to change with 100 others in line?” In the end, America must “face the fact that there’s not enough work…” and that we have to “rapidly expand work opportunities.” Today, the “employer has to value the employee to make an investment.”

Too often, “we treat these guys as paychecks, we don’t respect their ability to parent and they resent it,” Edin mentioned. And, these fathers long for the feeling that “society respects you, that you’re part of the American fabric.” But, they recognize “the importance of being there” for their children. Many of the respondents interviewed said they “want to be there to bear witness” to their child’s development, such as the “Sesame Street mornings” and “first step.” These young fathers also “want to be the ones to take their kids to that special place” such as the museums in downtown Philadelphia (which was where her study took place).

Looking at statistics, Edin pointed out that “over the first five years of [children’s] lives, only 5% of their mothers are staying single.” These “mothers are churning in and out of relationships” and the government does not recognize that reality. Adding to that, for these single mothers, “under 30% are stable [relationships] and the rest break up for the rest of the child’s life.” “We treat her [the single mother] as if her and her child are the only relevant parties” and ignore the overall “fragile families” of unmarried fathers who “want to stay together…want to stay involved.” She said she has been “trying to convince agencies that they need to see family as a father-mother-child and not just as a mother-child” for the past five years, and “we’re coming along [slowly].”

But, there are significant limitations because more and more, housing policy “builds distance between fathers and children” and negates the opportunities of young fathers to bond with their children early on in their lives. Edin said, “It is policy that is holding us back” and men are “waiting for society to catch up” to the times. Also, Edin criticized the overall policy because “many of our policies aimed at poor folks…have not moved ahead in ways that they need to.” She admitted, “We have too little innovation around these issues” and she found it astonishing.