When author M. Stanton “Stan” Evans died last week at age 80, Accuracy in Academia and the conservative movement lost an irreplaceable friend and mentor, as did many of us personally. 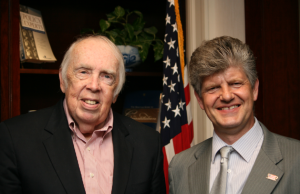 Those of us who have lost parents and grandparents got to experience a similar loss again. Yet and still, it is worth noting that no one really dies if he leaves behind good memories and a life that lessons can be learned from. Stan Evans left oceans of both.

We who had the privilege of working with him got to see what went into producing great copy, whether it was in columns, magazine articles or books. Stan never stopped editing himself, as editors and publishers who have worked with him will attest.

You really wanted to up your game when writing for Stan. When you got your pieces back from him with just a few word-changes, you high-fived yourself.

When my then 14-year-old stepson—Darryl—wrote a letter to the editor of Consumers’ Research magazine, which Stan published, he worked on it for three solid hours. When I pointed out to him that he didn’t spend three solid minutes on his homework, Darryl said, “Yes but Stan will see this.”

Not that Stan was overbearing, anything but. “Okay” and “that’s fine” were his answers to just about every employee request. Indeed, most employers would have viewed some of these requests as outlandish:

Conversely, I know of no recorded instance of Stan ever taking a vacation. Truly, he led by example.

And he never forgot his roots. We got a call one day from a gentleman who had seen Stan on C-SPAN. “He said he was born in Kingsville, Texas, and that’s where I am calling from,” the caller said. “I’m 84-years-old and I’ve lived here all my life and never knew anyone famous came from Kingsville, Texas.”

I asked him for his phone number but he demurred: “I don’t want to bother him.” “Oh, trust me on this, he will want to talk to you,” I said, and he did, for about three-quarters of an hour.

Stan’s one-liners were priceless and we were lucky to hear them first:

I told Dan Flynn, when he was researching an excellent tribute to Stan that ran on Breitbart.com, that “When Stan’s own dad died, Stan said his father’s life was marked by ‘unfailing dedication to principle and unfailing kindness to people.’”

“This I dare say fits Stan to a T.” And not just with people.

Only Stan would buy a three-legged dog. Once, I saw Zip, the canine in question, sitting in Stan’s apartment in his easy chair, a bowl of her beloved grapes beside her, watching Masterpiece Theater. I thought to myself, Zip lives more elegantly than her master does.

Towards the end of her life, Stan could not bring himself to put that dog to sleep. She died of natural causes.

He carried many of us a good deal longer than that. For example, he spoke, gratis, at Accuracy in Academia events annually in the decade I’ve been here.

A final memory, at least for this column: Once, on a car ride across Capitol Hill, which takes approximately 20 minutes, Stan, the ultimate Elvis fan, played his favorite song from the King, “Suspicious Minds,” five times. Now he can hear it in person because he’s where Elvis is in the building.