Even when teachers don’t appear to be complaining about Common Core they actually are, because CC is so unpopular that bureaucrats and politicians try to camouflage it. Yet and still, like the spots on a leopard, C squared’s trademarks are becoming easy to spot. 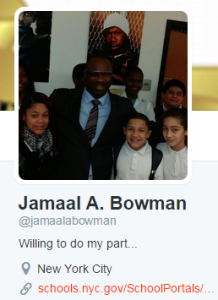 For example, on his personal blog, Bronx teacher Jamaal Bowman complained about the Tyranny of Standardized Testing but the CC standards are fairly simple to discern. I tried to make them even easier by italicizing:

“As a classroom teacher, the state test jargon became part of the lexicon. We were told to focus more on “non fiction” reading passages because that was on the state test. “Be sure to practice multiple choice questions, so students get used to them,” administrators would often say. Practice exams occurred at least once a week beginning about two months prior to the real thing. These practice tests took at least two hours to administer and another two hours to grade. All of this time could’ve been used developing and implementing truly rich and authentic curriculum.  Because of this obsession with testing, our kids did not have art, music, theater, or any truly aesthetic course to enlighten their varied intelligences. They also didn’t have nearly enough science, as math and language arts were the only subjects tested. The student curriculum only included reading, writing, and arithmetic.”