Sustainability has become a recurring theme among American colleges, and whether it’s through university curricula or carbon offsets, this new-wave has pressed students to organize into a radical progressive movement. 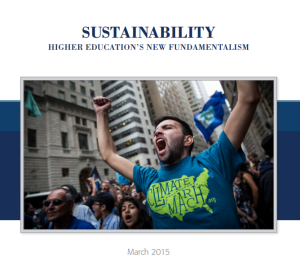 In a 2015 report, Sustainability: Higher Education’s New Fundamentalism, by the National Association of Scholars (NAS) conclude that “To the unsuspecting, sustainability is just a new name for environmentalism.  But the word marks out a new and larger ideological territory in which it is claimed curtailing economic, political, and intellectual liberty is the price that must be paid to ensure the welfare of future generations.”

The NAS claims that radical environmentalists achieve these ends through a six-step process:

1) The integration of “sustainability” into an unrelated curriculum;

2) The fashionable unacceptance of opposing ideas

3) The use of “nudging” as a form of social pressure

4) The disregard for a low marginal utility

5) The radical demand for divestment from fossil fuel businesses; and

6) The widespread belief that global warming is an indisputable fact

To implement these policies, many universities have joined a sustainability awareness organization called the American College and University Presidents’ Climate Commitment, “tapping the power of college presidents to set the agendas for their institutions,” thus declaring sustainability a “consensus,” among all higher education institutions.

When they sign onto this “consensus,” colleges are rated on their approach to sustainability, while students at these universities or in these programs are obliged to pledge their loyalty by taking the “Sustainability Literacy Test.”

“Colleges and universities should be neutral in important and unresolved scientific debates, such as the debate over dangerous anthropogenic global warming,” the NAS argues.  “Claims made on the authority of ‘science’ must be made on the basis of transparent evidence and openness to good arguments regardless of their source.”

It’s important to note when assessing the problems which we as a country and as a millennial generation are coming to face, that we have to do so in moderation. Knowing the difference can make all the difference. “The sustainability movement only pretends to be about good stewardship of the environment.  It really takes its bearing from hostility towards material prosperity, consumerism, free markets, and representative self-government.”