Home Perspectives Where do 2016 Candidates Stand on Guns? 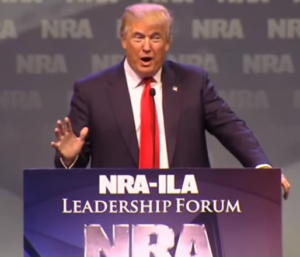 While the presidential nominees have been jostling for the public’s attention, some voters are looking towards the future and what it could bring regarding the 2nd Amendment.

Currently, with Donald Trump as the presumed Republican nominee, and Hillary Clinton and Bernie Sanders vying for the Democratic nomination, there is a need to review the frontrunners stances on the 2nd Amendment.

Former Secretary of State Hillary Clinton has remained consistent in her support of gun control. According to her website (hillaryclinton.com), if elected, Clinton will “strengthen background check and close dangerous loopholes in the current system, hold irresponsible dealers and manufacturers accountable, keep guns out of the hands of terrorists, domestic abusers, other violent criminals and the severely ill and keep military-style weapons off our streets.”

Senator Bernie Sanders opinions on guns, although not listed on his website (berniesanders.com) have fluctuated from his past opinions although they are similar to Clinton’s. Sanders promises to strengthen the background check system, close the gun show loophole, make “straw-man” purchases (buying a firearm for someone who is unable to lawfully purchase one) illegal, address mental health and ban semi-automatic assault weapons.

In contrast to both candidates, Donald Trump although hesitant at first has now fully embraced the 2nd Amendment culture and has been endorsed by the National Rifle Association (NRA). Trump stated that “The second amendment to our Constitution is clear. The right of the people to keep and bear arms shall not be infringed upon. Period.” (donaldjtrump.com) With this ideal in mind, he says he will enforce current gun laws by convicting criminals, fix the mental health system, and defend the rights of law abiding gun owners.

Now, the candidate’s current views are not what they have always been. All three have changed their opinions over the years, adding to the confusion on whether or not the presidential hopefuls will fulfill their promises.

Throughout her campaign in 2008, Clinton spoke of her relationship with guns, going hunting and shooting and showing how this is a part of American Culture. In the Democratic debate on April 16, 2008 she stated that “I respect the Second Amendment. I respect the rights of lawful gun owners to own guns, to use their guns … so we will strike the right balance to protect the Constitutional right but to give the people the feeling and the reality that they will be protected from guns in the wrong hands.”  This statement seems a stark contrast to her forceful support of gun control in this campaign.

Sanders has had a varied history with gun control and support of legislation in his time as a senator. Previously, he voted against the Brady Handgun Violence Prevention Act which would require a five day background check on purchases of firearms. In 2012 however, he voted in support of amendments to expand background checks. Sanders has also changed his mind on his support for immunity to gun manufacturers but now says he would repeal it. As senator from a state with one of the highest rates of gun ownerships, one would assume Sanders would be far more pro-gun than his record states.

Trump is similar to the other presidential nominees in that his opinions on background checks and assault weapons have changed in the recent years. In his book (published in 2000), Trump stated that he supported the assault weapons ban and longer wait periods for purchases of firearms. By 2011, he said that he was against gun control. Now, the NRA-endorsed candidate is completely pro-gun and has been quoted as a ‘big second amendment person.’