George Washington University is a private university located in Washington, D.C. and, thanks to donations from the Charles Koch Foundation and other groups, has a Regulatory Studies Center on its campus. Public Citizen, a left-wing consumer advocacy group also based in Washington, D.C., recently issued a report criticizing the Charles Koch Foundation for its undue influence on the Regulatory Studies Center.

The Regulatory Studies Center is headed by former George W. Bush administration official Susan Dudley, who headed the Office of Information and Regulatory Affairs at that time. Dudley has also worked at the Mercatus Center, a free-market think tank at George Mason University, a school that also receives donations from the Charles Koch Foundation. According to its website, the Regulatory Studies Center “is a leading source for applied scholarship in regulatory issues, and a training ground for anyone who wants to understand the effects of regulation and ensure that regulatory policies are designed in the public interest.” But, buried in the Public Citizen report is the fact that the organization opposed Dudley’s appointment during the Bush administration and issued an anti-Dudley report entitled, “The Cost Is Too High: How Susan Dudley Threatens Public Protections.”

Public Citizen is a consumer advocacy think tank founded in 1971 by Ralph Nader. Nearly three decades later, liberals accused Nader of throwing the 2000 presidential election to George W. Bush. The group publicly advocates reversing the Supreme Court case known as Citizens United, which permitted political speech from corporations and unions, in addition to advocating for the passage of Medicare-for-all legislation.

The organization’s report, entitled “A Key Cog in Charles Koch’s Master Plan: How the Purportedly Unbiased George Washington University Regulatory Studies Center Advances an Agenda to Deregulate America,” is full of left-wing fear-mongering aimed at the Kochs. The report said that the Regulatory Studies Center erroneously claimed that regulations are burdensome and unhelpful for the economy, despite the fact that the current booming economy displays the benefits of deregulation.

The report could only hypothesize on the center’s alleged influence, saying, “Many of the planks of President Donald Trump’s deregulatory agenda were put forth by the RSC long before Trump’s election.” Oftentimes, reports do not rely on hypotheses or conjecture, but facts, which calls into question the validity of Public Citizen’s methodology and conclusions from an academic perspective. 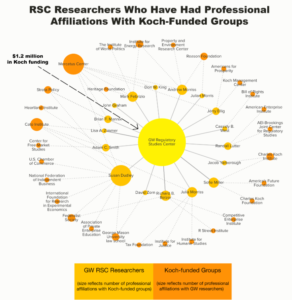 Also, the report has an eye-catching graphic of the “Kochtopus,” (a nickname coined by the Left to describe how the Kochs have infiltrated higher education and academia), and claimed over half of the Regulatory Studies Center’s authors who filed public comments are affiliated with Koch-backed organizations. The report added, “These authors accounted for 75 percent of the public comments that the RSC submitted in this time period.”

The report said the Kochs orchestrated a decades-old strategy to allegedly infiltrate higher education by offering exorbitant amounts of money to fund friendly scholars and think tanks to push their deregulation and anti-environmentalist agendas. In the name of integrity, the report said, George Washington University should not “enable a corporate-funded, anti-regulatory group to masquerade as a neutral center of academic inquiry.”

Public Citizen’s recommendations to George Washington University are as follows:

Tonya Mullins, a spokeswoman for the Charles Koch Foundation, responded to the Public Citizen critique in a statement she gave to The Washingtonian magazine, “We support scholars with a long track record of high-quality work on issues of consequence at more than 350 schools…Faculty call the shots and follow their research wherever it may lead—as they should. That openness is characteristic of and imperative to academy discovery. We’ll continue to speak out against tactics like this aimed at harassing scholars rather than engaging issues on their substance—wherever those attacks originate.”

As background, the Charles Koch Foundation is the philanthropic charity bearing the name one of of the Left’s favorite boogeyman: Charles Koch. Charles Koch and his brother, David are among the top 20 richest Americans in the country and both inherited the family business Koch Industries. Charles and David Koch have donated millions of dollars as philanthropists, David focusing on medicine due to his past bout with cancer, and Charles on community organizations and education efforts.

The Kochs used to head multiple political advocacy organizations, which the Left labeled “Koch brothers”-run outfits, such as Americans for Prosperity, Concerned Veterans for America, the LIBRE Initiative, and Freedom Partners Chamber of Commerce. David Koch retired from political advocacy a year ago for personal reasons Although the Kochs have been champions of criminal justice reform and have strongly advocated for nonviolent ex-felons to have a second chance at a normal life, the Left continues to pile on these philanthropists in the media.

However, the Left is never fair when covering the wealthy who oppose their policies. For example, rarely does the average American hear about how George Soros-funded organizations such as the Open Society Foundation and the Center for Popular Democracy dominate academic institutions. It is always the Kochs, libertarians, and the political Right who are unfairly funding think tanks across the country.