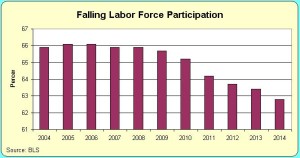 “The Great Recession officially ended in June 2009, nearly five years ago,” Heidi Shierholz, Alyssa Davis and Will Kimball write in The Class of 2014: The Weak Economy Is Idling Too Many Young Graduates, a report released Thursday by the Economic Policy Institute. “However, the labor market has made agonizingly slow progress toward a full recovery, and the slack that remains continues to be devastating for workers of all ages.”

“The U.S. labor market still has a deficit of more than 7 million jobs, and the unemployment rate has been at 6.6 percent or higher for five-and-a-half years. (In comparison, the highest unemployment rate in the early 2000s downturn was 6.3 percent, for one month in 2003.) The weak labor market has been, and continues to be, very tough on young workers: At 14.5 percent, the March 2014 unemployment rate of workers under age 25 was slightly over twice as high as the overall unemployment rate, 6.7 percent. Though the labor market is headed in the right direction, it is improving very slowly, and the job prospects for young high school and college graduates remain dim.” The EPI shares an office building with President Obama’s favorite think tank—the Center for American Progress.

Perhaps the EPI study was a preemptive strike. While most media reports echoed the White House line on the unemployment rate that dropped to 6.3 percent in April, buried in these government statistics is some cause for alarm. “The number of people in the labor force fell by a whopping 806,000, wiping out the February and March gains and a bit of January as well,” Neal Irwin wrote in The New York Times.

In fact, Dan Mitchell of the Cato Institute shows that we have the lowest labor force participation rate in at least a decade. The labor force not participating consists of men and women who can work but aren’t.

“Sixty percent of the long-term jobless are 35 or older; 36 percent held professional, technical, managerial and administrative jobs (the rest were scattered in sales, service and blue-collar occupations),” Robert J. Samuelson wrote in a column in The Washington Post. Samuelson has a greater understanding of economics than most of his peers in the media, or, for that matter, at his day job.

“A study by Princeton economists Alan Krueger, Judd Cramer and David Cho is discouraging,” Samuelson reflects. “Among the long-term unemployed from 2008 to 2012, only 36 percent had jobs 15 months later, the study found. As for the rest, 30 percent were unemployed, and 34 percent were not in the labor force. Even for workers with jobs, success was limited. A third had full-time jobs; the others had part-time or interrupted full-time work.”