photo by the Office of Governor Baker

The Pioneer Institute conducted a case study on Phoenix Academies, a successful charter school network in the Commonwealth of Massachusetts. Their focus is not on separating at-risk youth and children into grade levels, but tailoring their educational programs to the needs of the child, helping absent children and youth receive an education, and improving their educational outcomes. The charter school network also focuses on gang-involved youths, special needs students, and English language learners to help them receive a quality education. Often termed ‘alternative education,’ Phoenix Academies are trying to change the realities on the ground with at-risk youth and students.

Interestingly enough, Phoenix recruits teenage parents, truant students, school dropouts and those involved in the court system. The academies accept English language learners, some as old as nineteen or twenty years old, and students with disabilities who do not succeed in traditional high schools. The emphasis on “relentless support” helps students who miss school on a consistent basis, which consists of a tailored curriculum and scheduling for their students who struggle to attend classes or master the material. Their “Attendance Transformation Team” goes and crafts individualized plans to support students to continue their education. The academies’ “Student Support Team” makes phone calls, sends text messages, go to the student’s home to encourage the student to return to class and keeps in touch with their families. Phoenix also has a day-care and pre-school center called the Little Scholars Center, which helps teenage parents stay in school and to study the material. Some of the major components of Phoenix’s system are a flexible curriculum and smaller class sizes.

Ten years since Massachusetts passed an education reform bill known as the Massachusetts Education Reform Act (MERA), Phoenix Academies has tried to bridge the gap for those who drop out of school or those who underperform. According to 2006 statistics, almost 11,000 students dropped out of high school, and by 2015, that number was 5,000 dropouts. Graduation rates in 2015 did not go beyond 72% and in one immigrant-heavy part of Massachusetts known as Chelsea, the graduation rate was 63% in 2015.

According to the Pioneer Institute, “between 2008 and 2011…In all but one of those years, 100 percent of graduates applied and were accepted to a post-secondary institution.” Additionally, the case study noted, “Forty-nine students, or 80 percent of all graduates between 2008 and 2011, enrolled in some form of college.” Of the 20 students who graduated in 2013, 80% finished their first year of college education. Below is a table that the Pioneer Institute included on the make-up of the Phoenix Academies in Chelsea, Massachusetts and the public school system there: 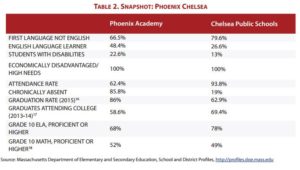 The school does have a disciplinary system, which helps students adjust to life in school. They have a merit and demerit system, where infractions such as lateness to class, hallway wandering and the like aren’t tolerated, which leads to detention. The student meets with the disciplinary staff and steps are taken to improve the student’s discipline.

Photo by Office of Governor Baker