Chicago Public Schools, during Thanksgiving weekend, announced its new policy to create gender-neutral restrooms for its students. The district used Twitter, a social media platform, to make the decision. It is unclear whether parents were included in the decision-making or whether they were informed of the decision.

The district’s video and text announcement called the so-called “inclusive” restrooms a move towards “true equity.” It said, “There cannot be true equity in our district without gender equity for our students and staff. Learn about how we’re requiring all schools to adopt new signage to make our restrooms more inclusive.”

The Daily Signal reported on the signs’ wording, which include: 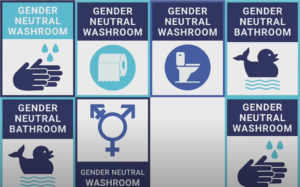 District Title IX officer, Camie Pratt, claimed that the district was complying with “new federal guidelines” to “have fair and equitable access to bathroom facilities that align with their gender identity.” The public school district will give all schools “updated signage that makes our bathrooms more inclusive.” These signs will “make it clear that all restrooms are open for use by anyone who feels comfortable.” Staff members will continue to use the staff-only bathrooms.

Chicago Public Schools, pre-pandemic, had an enrollment of over 340,000 students. The gender-inclusive restroom signage publicity stunt calls into question the district’s priorities: Is it more worried about social media and political overtures, or more worried about providing quality education?

The Left’s seizure of Title IX to enforce gender identity politics in public education is not a new trend. Girls, young women, and parents have publicly spoken about feeling threatened by the presence of biological men entering restrooms and the increased potential for sexual assault and other crimes. The ongoing case in Loudoun County, Virginia, where a juvenile male sexually assaulted multiple young women in school restrooms without punishment, is an example of how gender identity politics can endanger women.

Public schools in urban areas like Chicago have failed to deliver quality education for decades. Changing the school district’s restroom signs is a token political move to appease the Left, without changing the inherent flaws of public education, such as entrenched teachers’ unions which dumb down curriculum or automatically promoting unprepared students to the next grade level.