Contrary to what history classes may teach, the Red Scare was not some purging of innocent Americans: it was a noble effort to rid the government of powerful communist infiltration and influence.

Author M. Stanton Evans explores this matter in his latest book Stalin’s Secret Agents: The Subversion of Roosevelt’s Government. Sharing his thoughts with a group of Capitol Hill and D.C. area interns during Accuracy in Academia’s second author’s night of the year, Evans explained the dangers Soviet Union sympathizers within the United States government posed to Western ideology and policy. 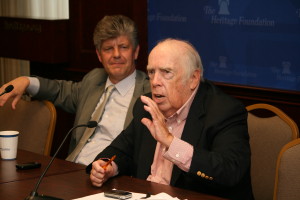 “One reason why communists got into the government during World War II,” he said, “was because the Russians were our allies, so many saw them as ‘the good guys’ and we couldn’t bar them from our government.”

In fact, some agents of the Soviet Union, as Russia was then known under communist rule, held extremely high levels of power during the war, Evans explained.  At the Yalta Conference, a meeting between the United States, United Kingdom, and Soviet Union leaders to discuss the threat of Adolf Hitler, Communist State Department official Alger Hiss “was the most influential single American,” Evans said. “All the questions were being referred back to Hiss.”

“The people in these conferences who were making the decisions for ‘our side,’” Evans explained, “were actually Soviet Union agents.”  But it wasn’t just the fact that Communists were present that made them dangerous. “It’s what they did when they were there,” Evans said. “Spying wasn’t the real problem – the problem was the policy influence.”

Evans stressed the importance of using primary sources, explaining to the audience that secondary sources – such as the Internet – are often just “recycled [information] that people have not researched themselves.”  The authors’ reliance on primary sources in developing the research for their book gives readers a strong sense of credibility. 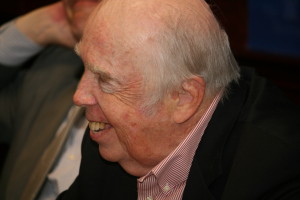 The conclusions Evans reached from conducting this thorough research brought him to draw parallels between Communist infiltration during World War II and problems he sees in today’s politics.

“People during World War II would say, ‘They’re just members of the Communist Party.  What’s the problem?’” he said. “You see the same mindset in the past decade with radical Islam.”

Today’s government, Evans believes, has downplayed the scope of and the threat that radical Islam poses to the United States. After a radical Islamist tried to drive a car bomb into Time Square in May of 2010, the government tried to determine the terrorist’s motivation for the attack.

“When questioning [Attorney General] Eric Holder about what motivated the car bomber, [Holder] said it could have been any number of factors,” Evans said.  Failing to identify radical Islam as one of those factors, Evans explained, Holder’s answer exemplifies a clear resemblance to the Roosevelt administration’s failing to correctly identify dangerous communist infiltration during World War II as a threat.

Future generations will have more to deal with than radical Islam, however. When asked by one audience member to clarify the current threat of communism, Evans said that “communism has never totally gone away.” 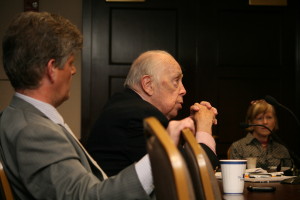 But Evans urged America’s future generation to stand strong against the threat of tyranny: “It’s up to you,” he told the young audience. “It’s going to be the world you’re living in and we’re going to need more young people like you who are willing to do the work. And it’ll be a lot of work.”

Isabel Mittelstadt is an intern at the American Journalism Center, a training program run jointly by Accuracy in Academia and its sister organization, Accuracy in Media.