The media rarely miss a chance to go after conservatives funding their favorite causes but virtually ignore the more extensive, expensive and successful efforts of left-wing money men to bankroll theirs, particularly on college campuses.  “If you go in any book store these days you see a book about ‘dark money’ aimed at the right,” Emily Zanotti of the Heartland Institute pointed out in a panel at the Conservative Political Action Conference. 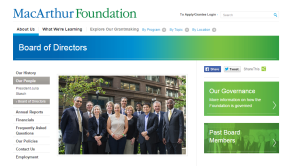 Yet and still, as Zanotti notes, foundations such as the MacArthur Foundation pour billions into not only the Smithsonian but also Columbia University and the University of Chicago.  Indeed, as the Heartland Institute’s web site Left Exposed, which Zanotti manages,  notes, “The John D. and Catherine T. MacArthur Foundation, the tenth largest philanthropic foundation in the United States, is one of the largest donors to ‘anti-technology’ activism and progressive causes. The family foundation — the work of the entrepreneur who created Bankers Life and Trust — is a co-founder of the Energy Foundation, and a vocal supporter of non-profit organizations that focus on combating man-caused climate change, with a focus on establishing a global energy policy that eschews cheap fossil fuels for more-costly ‘renewable’ energy sources.”

“The MacArthur Foundation is also known to promote high achievers who meet its ideological criteria through the use of its ‘genius grant’ fellowships. The foundation uses its $6 billion endowment to fund annual grants totaling approximately $218 million — grants that go mostly to left-wing organizations. At least one of MacArthur’s ‘genius grants’ proved ill-advised, when recipient Peter Gleick of the Pacific Institute embroiled himself in the ‘Fakegate’ controversy by peddling documents he admitted to stealing (and at least one he forged) in a failed attempt to smear the ‘climate skeptic’ Heartland Institute.”