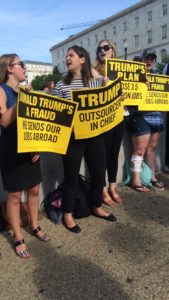 “Donald Trump, you can’t hide. We can see your racist side,” chanted the protesters who held various signs criticizing Trump’s honesty and his professional record.

“Trump U was a sham. What is Donald’s next scam?” and “racist, sexist, anti-gay, Donald Trump, Go away!” were other chants repeated throughout the protest.

Interestingly enough, some bystanders joined chanting while others opposed the activists yelling: “Go, Trump!” For an hour the protesters waited out front for Trump to arrive, but a police officer confirmed that Trump had already entered through a backdoor by 9 am.

Protesters also showed disapproval of GOP leaders expected to meet with Trump that day. They held signs with Republican leaders wearing Trump’s “Make America Great Again” hat. Of these included his former presidential opponents who have yet to endorse him, Senator Ted Cruz and Senator Marco Rubio. 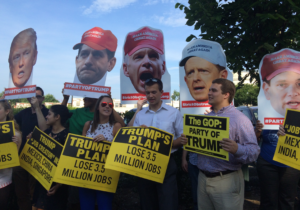 The streets around the Capitol Hill Club building were closed off by yellow tape and many police officers stood around the area. “We are told to get people off the street,” said one police officer. “I’m basically here to preserve order.”

Another Trump demonstration took place at a DC Walmart a few hours later. Workers demanded that the corporation “Dump Trump” by following the actions of other big companies like Apple, Wells Fargo, and Walgreens, which have all withdrawn financial support from the 2016 Republican National Convention.