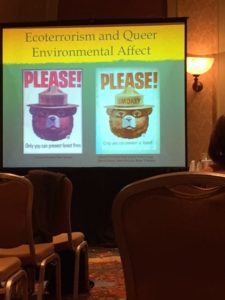 photo of eco-terrorism panel at MLA 2017 by Spencer Irvine

Eco-terrorism, which has caused tens of millions of dollars in property damage over several decades, was the focus of a recent panel discussion at the annual Modern Language Association (MLA) held in Philadelphia early this year. Cal-State Fullerton assistant professor of English, Nicole Seymour, discussed an eco-terrorist cult classic movie “Silent Running,” claiming that eco-terrorism protects the environment.

Seymour’s sympathized with aspects of eco-terrorism, such as comparing property to life. In her words, “[it’s] something incredibly naïve’ to distinguish the two” and the term eco-terrorism is “both accurate and unethical.” She wondered if academics should be “proving some human lives are more valuable than property or capital.” As an assistant professor studying “queer environmental affect,” Seymour said that there is a “quintessential, anti-social effect” of eco-terrorists.

She claimed, “No eco-terrorist has either killed or harmed a human being… at least in the U.S.” “Switching out of the human for property,” Seymour said, is a common mistake of anti-environmentalist rhetoric. She added that the cult classic environmentalist movie “Silent Running” could “be read as an allegory for the U.S. ecocide in Vietnam.”

“Silent Running” featured a ‘conservation pledge’ by the main character, Lowell. Lowell is a “queer non-national” and is in charge of maintaining a space station that houses America’s natural wildlife. Seymour said that the movie promotes “anti-environmentalism” and “perverts U.S. citizenship” as a result. She said that the movie is “sentimental to the point of cheesiness” and that it does not reconcile the queer (i.e. gay or homosexual) main character with environmentalism. Seymour pointed out, “The faggotry, the de-masculinity” of the main character Lowell could be associated with eco-terrorists. She said that the movie emphasized “the non-human, which is by definition, queer.” Seymour then blasted fans of the movie and said that “rabid fans invest in the marginal movie” with movie object kits (such as drone kits).

Seymour lamented the lack of national environmentalism in America, which once existed, she claimed, between the 1940s and 1950s during World War Two and the start of the Cold War. American government rhetoric focused on protecting America’s natural resources (i.e. environment) against Nazi Germany, Japan and then the Soviet Union. She made note of, “The rise in environmentalism and this very weird thing that U.S. environmentalism gets [revived] during the ecocide in Vietnam.”

She displayed a comparison Powerpoint slide of two Smokey the Bear posters, where one image was very patriotic and advocated for the protection of the environment against America’s enemies, and the other did not refer to national security-environment ties.

Seymour warned, “I expect that we will hear more about eco-terrorists” during a Trump presidency. She was concerned that “the successful prosecution of eco-terrorists, such as [Eric] McDavid, will serve as a model of prosecuting civil disobedience.”