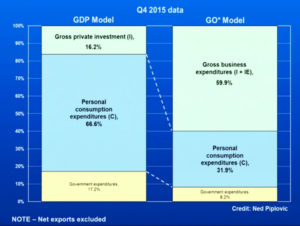 Give credit to Mark Skousen, www.mskousen.com.

Despite the theory purveyed by the media, consumer spending is not the strongest catalyst of economic expansion, according to economist Mark Skousen, author of The Structure of Production.

“…Because consumer spending represents…two thirds basically of GDP you get the media constantly making, creating a myth. It’s one of the most common myths in economics…you get it from all the publications,” Skousen explained at a CATO Institute forum titled “GO Beyond GDP: What Really Drives the Economy?”

Contrary to the economic assumption that spending spurs growth, Skousen asserts that businesses, which account for a mere 16% of Gross Domestic Product (GDP), actually represent society’s most potent force for economic expansion. For this reason, he explained the value of examining another economic indicator called Gross Output (GO) in conjunction with traditional GDP calculations.

In contrast, the GO statistic describes all of the expenses associated with creating a product by adding “Resources,”  “Production,” and “Distribution” to the standard GDP calculation. This statistic is more sensitive to economic fluctuations than GDP and offers an entirely different view of the economy. GO shows that businesses account for 59.9% of expenditures and consumers contribute only 31.9%.

Skousen calls GO “…a paradigm shift in the way we treat macroeconomics” and the Bureau of Economic Analysis began tracking the statistic in 2014.