At the Heritage Foundation on the anniversary of Pearl Harbor, two law professors gave a preview of the second Fisher v. Texas decision, which was again before the U.S. Supreme Court. Vanderbilt Law’s own James Blumstein and the University of California-San Diego’s Gail Heriot gave background on the court case. 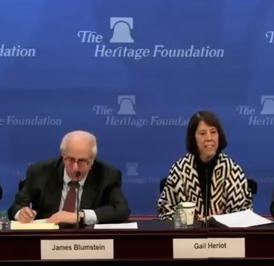 Blumstein said that the University of Texas-Austin thought that it can use “race as a proxy for characteristics” in their admissions process. However, the first Fisher v. Texas case “drew a line [with] no special preference” for race and sent the case back down the legal system until the recent appeal before the Supreme Court. He pointed out that “race has been used for remedial purposes” in U.S. history with the “goal to provide a remedy for a wrong” in the past. It was supposed to be a way to combat the “ongoing effects from racial discrimination” in America.

Yet, Blumstein warned, Texas’s racial preference criteria in their admissions process ends up turning black and minority students into “vehicles” and “a means towards education towards others.” He predicted that this would result in subsequent “problematic situations” and that the University of Texas “must show necessity, must show reasonable non-racial alternatives” to defend their racial preference component in admissions.

Heriot argued that “few would support racial preference admissions” because “minority students are not public utilities.” Heriot warned, “Even if white students benefit from that diversity, it’s got to go” because she felt, “If the nation went back on the principle of color-blindness for what it’s perceived as a good cause…then it’s a sad story.” She said “there are now four empirical studies that find a mismatch effect” (three have been peer reviewed) between minority students and the universities they attend, which they were admitted due to affirmative action and racial preference in admissions.

Heriot claimed, “We would have more black scientists…if we engaged in race-neutral admissions policies, or at least lowered the level of preference.” She continued, “Instead, current policies give us more, sorry to say, unmarketable communications majors, more underwater basket weaving majors.”