The constant debate of how to fix public education is far from over. However, The Heritage Foundation came across new research for an improved education policy. 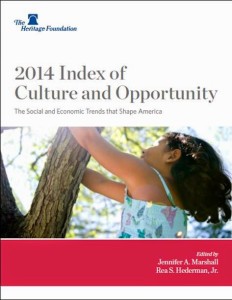 Jennifer A. Marshall, Vice President of the Institute for Family, Community, and Opportunity, discussed new research to better the failing education system for children in low income areas. While the Center for American Progress argues that government needs to increase funding for better education, the Heritage Foundation suggests a different approach.

“The charts on public school test scores [over time] are the most boring ones in the book, because they are just a flat line,” Marshall asserted at a blogger’s briefing at the Heritage Foundation on July 29, 2014. Indeed, in the Heritage Foundation’s 2014 Index of Culture and Opportunity, Lisa Snell dissected the National Assessment of Educational Progress (NAEP) and found that student achievement has remained “static” for the past 40 years.

Snell is the Director of Education and Child Welfare at the Reason Foundation. “International test scores also show that education funding and academic performance do not necessarily correlate,” Snell noted. “In a 2013 report, the Organization for Economic Co-operation and Development (OECD) examined the relationship between countries’ education spending and academic achievement and found that spending above $35,000 per student cumulatively between ages six and 15, is unrelated to performance.”

“In fact, nations that spend more than $100,000 per student cumulatively during those school years—such as Norway, Switzerland, and the United States—get about the same results as nations with less than half the per-pupil spending levels, such as Estonia, Hungary, and Poland.”