Oberlin College, a liberal arts school in the small town of Oberlin, Ohio, is a “woke” (i.e. social justice activist) college in the American heartland. However, this social justice activism has led to a stunning court decision to fine the college $22 million in punitive damages against a local bakery in the town, in addition to $11.2 million in compensatory damages. Most likely, according to the news website Legal Insurrection, it will be reduced to a total of $22 million in accordance to state law. 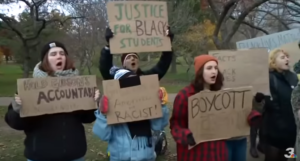 Even comedian Bill Maher weighed in on the jury decision to fine Oberlin College tens of millions of dollars, saying, “Social justice warriors…are finally finding that maybe there’s a price to pay.”

Gibson’s Bakery is a family-owned and operated business that has operated for five generations in Oberlin — since 1885. The lawsuit they filed against the college stemmed from a series of events involving Oberlin College students, who stole items from the bakery, which resulted in retaliation from school administrators and students.

In November 2016, a black male Oberlin College student shoplifted two bottles of wine. When the store employees tried to stop the suspect and photograph him, they were attacked by the suspect’s associates. Police officers were called to the scene and arrested the suspect. When news of the arrest spread on the college campus, students, members of the Black Student Union, College Democrats, and student senators protested outside the bakery. Oberlin College Vice President and Dean of Students, Meredith Raimondo, allegedly passed out anti-Gibson’s Bakery fliers to protesters, but later claimed she was simply passing along information to those in the crowd and was only at the protest “to help ensure that a safe environment was maintained.”

Although three suspects pled guilty to shoplifting and criminal trespass and admitted that Gibson Bakery was not racist, that did not stop the protests or rhetoric from escalating. In fact, the protests outside the bakery led to a division within the town, with customers supporting the bakery and others not supporting the bakery. The bakery was unhappy with how Oberlin College handled the shoplifting incident and sued them over the school’s claims that the bakery racially profiled the shoplifters, which led to Oberlin severing business ties with the bakery. 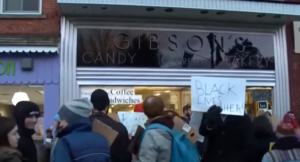 Another part of that lawsuit emerged when Gibson’s Bakery claimed that Oberlin College was defaming their name and reputation in public, in addition to supporting the student boycott of the bakery. Interestingly enough, the defamation claim was not disputed by Oberlin College. Oberlin College’s defense strategy was to play the victim, claiming that Raimondo was only at the protest to ensure safety of the student protesters and that Gibson’s Bakery physically assaulted the shoplifters, which was not true.

In the end, Oberlin College was punished for singling out a local business in the name of social justice activism and political correctness, to the tune of at least $22 million in damages.