Home Perspectives Has the Left Been Trumped? 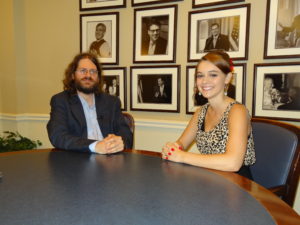 Regular Republicans may still be skittish about him but even their most eloquent and articulate critics on the left are hard put to make a coherent case against the presumptive Republican candidate for president.

This was evident at Accuracy in Academia’s second authors’ night in June with John Wilson. Refusing to directly answer questions, Wilson remained vague and contradictive throughout the interview that followed his presentation. Wilson, who only recently decided to write a book about Donald Trump, had conflicting views on “The Donald.”

As to his sources, Wilson stated that “there’s just so much (information) about Donald Trump, all kinds of news outlets as well as Donald Trump himself who has an endless stream of tweets and interviews.” While he has no plan to speak with his subject, Wilson seemed confident in his sources providing enough information to write his book.

As with many people, Wilson stated that “Ranging from his personality to his bigotry in many cases, his vindictiveness, and in some ways his intellectual laziness and that he doesn’t like to think deeply about where he stands on a lot of issues … there are an enormous number of negatives about Donald Trump.” Although Wilson made a note of “his bigotry in many cases,” he only mentioned one, that of the judge presiding over the Trump University court case.

While many voters would agree with him, Wilson contradicted himself later saying, “I like his personality in the sense that he’s someone who is willing to speak out, he’s not a scripted politician, reading off the teleprompter, giving the same speech over and over again. In some ways I hope that continues. I think it would be a shame if becoming a serious presidential candidate took the Trump out of Donald Trump.”

When asked who he would vote for if not Trump, Wilson replied as most left leaning people do, “Liberals end up having to reluctantly say that it’s going to be Hillary Clinton. I think that that’s the most common response and it most likely will be my response.” He does believe the former Secretary of State has received unfair news coverage of her e-mail scandals, but provided no examples of this alleged media overload.