Home Perspectives Health Care in Academia vs. the Real World 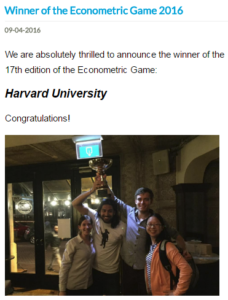 Four Harvard University students won the annual Econometrics World Championship (also known as the Econometric Game) in Amsterdam, The Netherlands. The annual event is organized by the University of Amsterdam and the VSAE (Association of Actuarial, Econometrics and Operational Research Students), involving up to thirty universities from across the world. The competition had 120 students participate in this iteration of the event.

Using European socio-economic data from 2004-2013, the team from Harvard concluded that more government intervention will improve low-income senior citizens’ health outcomes. One of the attending representatives from the event’s sponsors said: “This is a remarkable and important finding, because governments often tend to cut health care budgets (along with other issues) during periods of economic recession. But the results show it would be more beneficial if they were to make counter-conjunctural expenditures to help keep their citizens healthy.”

The press release concluded, “The biggest difference governments can make is to invest in prevention, especially in times of economic crisis.”

Actually, the scholars may want to look at how well that has worked in the United States. “In 2014, Medicare covered approximately 54 million people at an estimated cost of about $600 billion,” the Government Accountability Office (GAO) reports. “The Centers for Medicare & Medicaid Services (CMS), which administers Medicare, faces major challenges related to implementing payment methods that encourage efficient service delivery, managing the program to serve beneficiaries well, and safeguarding the program from loss due to fraud, waste, and abuse.” The GAO is the investigative arm of the U. S. Congress.

And Medicare offers a host of preventive programs.