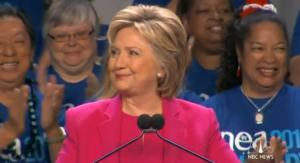 image via screenshot from NBC News livefeed of NEA convention in Washington, D.C.

She’s now a pro-abortion feminist who panders to the LGBTQ community. But there was a time when Hillary Clinton was a “Goldwater Girl,” named for 1964 Republican presidential candidate Barry Goldwater, and conservative in her political outlook. All of that changed when she went to college and attended Wellesley and Yale.

Today, Hillary-type women are the norm, not the exception. You can see this for yourself in the videos or pictures of young women screaming for their “rights” to abort the unborn. Some women even say they’re proud of their own abortions.

Colleges and universities are mostly to blame for this sad state of affairs. Consider that the Department of Women’s Studies at the University of Maryland has just announced that a full-time tenure-track position has opened up for an Assistant Professor specializing in LGBTQ studies.

The Department of Women’s Studies at the University of Maryland (UMD) already includes 11 core faculty and more than 80 affiliate faculty. “We have grown from 232 students in 3 courses in 1971 to over 1,366 students enrolled in Women’s Studies and LGBT courses for fall 2014,” the department says.

You can bet these graduating classes constitute armies for Hillary Clinton’s presidential campaign in 2016.

Students being taught “women’s studies” or “LGBTQ studies” at UMD may not get jobs in the ordinary sense, but they are being trained as “change agents,” determined to overturn the capitalist and patriarchal power structure. For most of these women, motherhood is an old-fashioned concept that keeps women oppressed.

An upcoming feminist conference openly dedicated to “social justice, activism, and revolution” is sponsored by the University of Maryland and “inspired” by Grace Lee Boggs, a Marxist who was a member of a communist splinter group called the Workers Party.

PBS aired a film about Boggs, saying that she had “a thick FBI file and a surprising vision of what an American revolution can be.”

We are now in the midst of that revolution.

When Boggs died, President Obama released a statement, saying, “Michelle and I were saddened to hear of the passing of author, philosopher, and activist Grace Lee Boggs.” He added that “Grace dedicated her life to serving and advocating for the rights of others—from her community activism in Detroit, to her leadership in the civil rights movement, to her ideas that challenged us all to lead meaningful lives.”

It seems as if Grace was part of Obama’s “fundamental transformation” of the United States. It’s not known if they were more than acquaintances, but it is certainly significant that he felt it necessary to acknowledge her role in community organizing and activism.

Of course, Obama was trained by an organization founded by one of history’s top community organizers, Saul Alinsky, while Hillary studied Alinsky in college and wrote her thesis on his revolutionary strategies. That seems like more than a coincidence.

For her part, Boggs’ legacy is also being celebrated in academia, especially at UMD.

We are told the successful candidate should be able to work across multiple disciplines and have expertise in one or more of the following areas:

One of the courses is described as follows:

Here are some of the questions to be tackled:

On September 16 the University of Maryland is sponsoring “Reimaging Everything: Women of Color, Feminisms, Art, Culture, and the Humanities Symposium.” This is the event “inspired by the words of revolutionary Grace Lee Boggs,” whose favorite books include C.L.R. James’s Notes on Dialectics: Left Hegelianism or Marxism-Leninism?

Dialectics is a Marxist way of describing and instigating social change. C.L.R. James was a Trinidad-born Marxist writer and activist.

The New Left Project reports that she sometimes wrote under a pseudonym of “Ria Stone” and co-authored “several insightful and pioneering works of Marxist theory,” including The Invading Socialist Society and State Capitalism and World Revolution.

Some chapters in the latter include:

Her book, The Next American Revolution: Sustainable Activism For the 21st Century, is said to document how “A world dominated by America and driven by cheap oil, easy credit, and conspicuous consumption is unraveling before our eyes.” Grace Lee Boggs “shows how to create the radical social change we need to confront new realities,” it says.

Radical social change is certainly what is being taught in the UMD Department of Women’s Studies. A newsletter article explains what some of its graduates are doing and their achievements. These are direct quotes:

Ah-hah! Now it all makes sense. Some of these women’s and queer studies graduates are getting jobs in the media.

But didn’t we already know that?

The “on media” section of a website dedicated to Grace Lee Boggs cites her appearances on the old Melissa Harris-Perry show on MSNBC and with Bill Moyers on public television, where she said, “We are the leaders we’ve been looking for.”

Clearly, her followers are in the media, as well as academia and the White House.