Academics have long vexed over urban studies, putting the flight out of major cities down to everything from technology to racism. 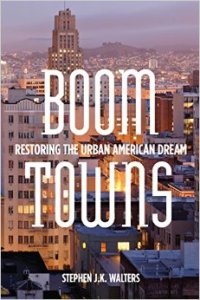 Yet and still, in the last half century, “some cities were not declining despite these immutable forces and some cities turned around despite these forces,” Stephen J. K Walters pointed out in a seminar on November 20, 2014 at the Cato Institute. Walters is an economist at Loyola University in Baltimore.

“If you want a healthy city, secure the property rights that go with capital,” Walters advised. One way of doing so is through tax cuts.

“When Proposition 13 passed, it saved San Francisco from itself.” People actually started moving there again.

Proposition 13 capped taxes across the board in California at one percent. And, “Within four years of Proposition 13, San Francisco’s tax revenues exceeded their pre-Proposition 13 levels,” Walters noted.

Walters is the author of Boom Towns: Restoring the Urban American Dream, which is published by the Stanford University Press.  As well, Mark Zupan, an economist with the University of Rochester, pointed out that Oklahoma City experienced a turnaround after the state passed a right to work law.

Zupan was on the panel with Walters.